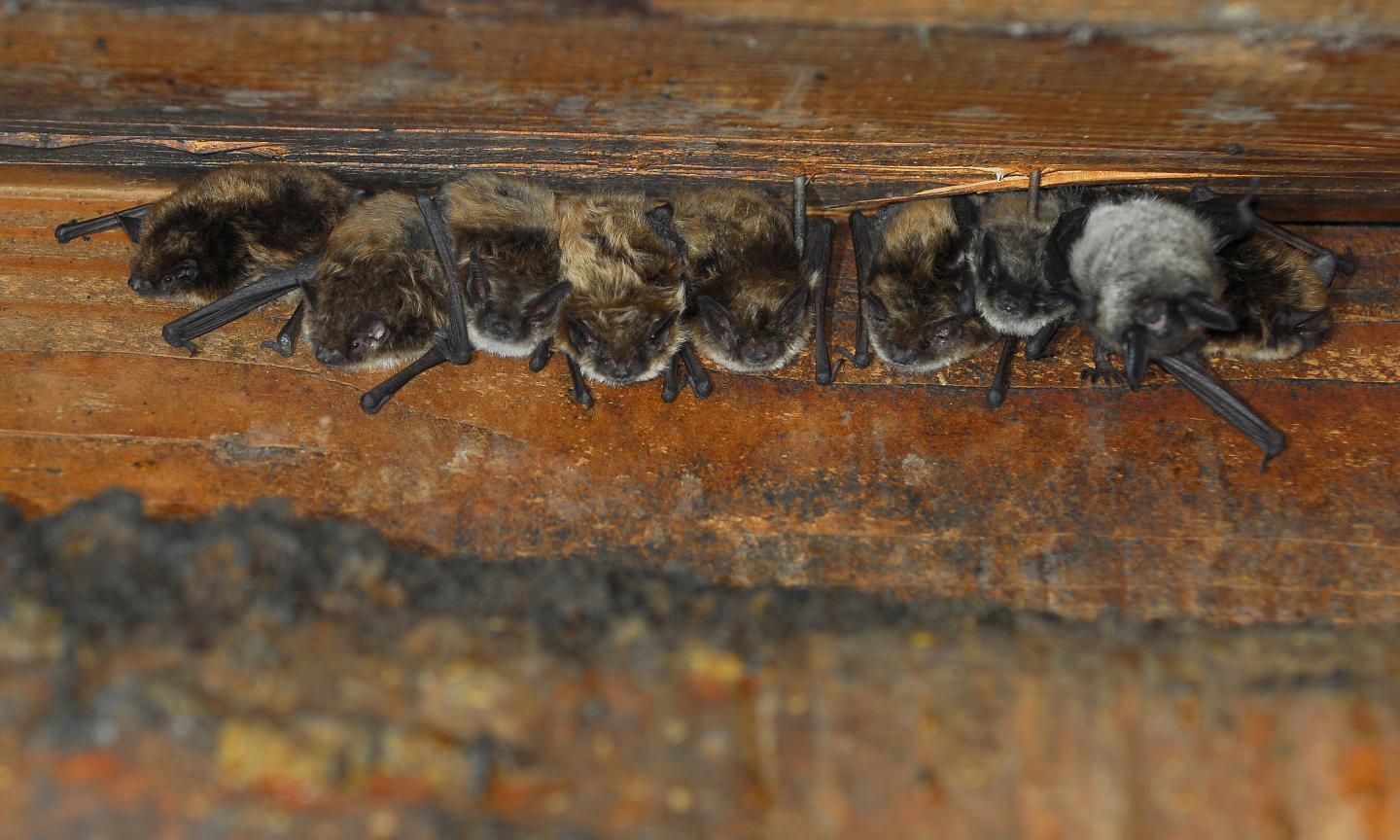 IMAGE: Pregnant little brown bats huddle together in "maternity colonies " to conserve warmth, as they are unable to regulate their body temperature.

For the little brown bat - a small mouse-eared bat with glossy brown fur - a warm, dry place to roost is essential to the species' survival. Reproductive females huddle their small furry bodies together to save thermal energy during maternity season (summer), forming "maternity colonies." In the face of severe population losses across North America, summer access to an attic or other permanent sheltered structure, as opposed to just trees or rock crevices, is a huge benefit to these bats.

In a new study published in the Ecological Society of America's journal Ecosphere, researchers with Ohio University, University of Kentucky, and the US National Park Service investigate and describe the conservation importance of buildings relative to natural, alternative roosts for little brown bats (Myotis lucifugus) in Yellowstone National Park.

Yellowstone's iconic high-elevation landscape provides abundant natural roosting places but not many buildings. The study involved four visitor areas with several buildings that are known to host bold little brown bats, which are among the few bat species that will make their homes in structures that are actively used by people, allowing humans to get up close and personal. Sometimes, the investigation even involved researchers capturing them by hand.

"We occasionally entered attics to look to see if they were occupied by bats," says lead study author Joseph Johnson, an assistant professor of vertebrate biology at Ohio University. "On these occasions we sometimes took the opportunity presented by inactive bats... We would gently pluck them from the walls and glue a transmitter on them in order to study their thermoregulation, but also to let them lead us to additional roosts."

Over the summers of 2012-2015, researchers tracked individual bats in the park. Using temperature-sensitive radio-transmitters, the researchers measured roost preferences and body temperature regulation in adult male and female bats roosting in buildings, trees, and rocks.

Their results show that reproductive females roost in attics in the study area on 84% of all days for which they collected data, while males roost exclusively in rock crevices or trees. It appears then that outside of maternity colonies, adult males and non-reproductive females will roost by themselves or in small aggregations.

The idea and study of bats using buildings is not new; people have probably seen bats in buildings ever since humans first started building them. What is new is comparing the benefits buildings provide bats with the benefits of alternative natural roosts. "That was what we did in our research," Johnson says, "using the challenging environment of Yellowstone National Park as a lens through which to view these benefits. As populations of bats continue to decline in North America, we believe that highlighting the importance of buildings to bats is important for conservation."

Outside Yellowstone and national parks, people frequently evict bats from their buildings. The removal of bats, especially maternity colonies that allow females to conserve warmth and energy, is a conservation concern as white-nose syndrome (WNS) continues to devastate populations in cave-hibernating bat populations across the continent.

WNS is named for a distinct white fungal growth around the muzzle and on wings of hibernating bats - it is the first known pathogen that kills a mammal host during hibernation. The fungus erodes skin and membranes and causes infected bats to burn through energy and fat reserves twice as fast as healthy individuals, and it essentially results in starvation. WNS fungus only thrives in the cold, damp environments typically associated with underground hibernation sites such as caves and mines, and it only grows on bats when they hibernate during winter. Bats that do survive WNS are particularly weak come spring and summer.

"To date, there have been no signs of WNS in these buildings or in Yellowstone, although the fungus has now been documented both east and west of the Park," says Johnson. If WNS is present in the study area, the researchers expect to see a sharp reduction in the number of bats present during the summer. "Thankfully," he says, "we have not seen any such decline as of yet."

Another complication for little brown bats is a state of body temperature regulation called "torpor." It can be thought of as a form of hibernation, but on a daily scale. In spring through fall, the little brown bat enters a state of decreased physiological activity. Torpor saves energy for the bat when the ambient temperature gets too cool (yes, even in summer). Instead of expending energy and fat reserves to maintain a constant body temperature, torpor allows the body to cool close to their roost temperature and physiological activity to slow. While in torpor, a bat's heart rate drops from up to 210 beats per minute to as few as 8 beats per minute.

For a pregnant bat, however, their ability to regulate body temperature decreases. Torpor also slows gestation and delays the birth of offspring, potentially forcing juvenile bats to mature quickly before winter arrives, and therefore decreasing survival rates of new generations.

Ultimately, the importance of buildings to bats may be especially great at high elevations and latitudes. The researchers believe that buildings allow for larger populations of little brown bats than would be possible without buildings in these landscapes, and that conservation managers need to evaluate the conservation value of buildings for bat populations as WNS continues to grow and spread.

"This warmth is important for bats during the summer months to help with their reproductive efforts," emphasizes Johnson. "Bats surviving WNS and trying to recover might benefit from a warm roost tremendously."