Female social dominance over males is rare among mammal species. Bonobos, one of our closest living relatives, are known for females holding relatively high social statuses when compared to males; though this is puzzling as the males are often bigger and stronger than the females. Researchers of the Max Planck Institute for Evolutionary Anthropology in Leipzig, Germany, have now analyzed the dominance relations between male and female wild bonobos and took particular interest in the high social status ranking of some females. The result: It is not female alliances that help females win conflicts. The context of the conflict does not seem to be relevant for its outcome either. Instead, the attractiveness of females plays an important role. If females display sexually attractive attributes, including sexual swellings, they win conflicts with males more easily, with the males behaving in a less aggressive way.

While intersexual dominance relations in bonobos never have been thoroughly studied in the wild, several ideas exist of how females attain their dominance status. Some researchers suggest that bonobo female dominance is facilitated by females forming coalitions which suppress male aggression. Others think of an evolutionary scenario in which females prefer non-aggressive males which renders male aggressiveness to a non-adaptive trait. 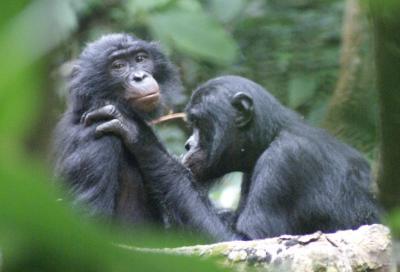 A recent study by researchers of the LuiKotale bonobo project from the Max Planck Institute for Evolutionary Anthropology reports on the outcomes of intersexual conflicts in a bonobo community near the Salonga National Park in the Democratic Republic of the Congo. Based on the analysis of outcomes of conflicts between the sexes, they found a sex-independent dominance hierarchy with several females occupying top ranks.

Furthermore they discovered that only two factors have a significant influence on the outcome of intersexual conflicts: female motivation to help offspring and attractiveness. That is, whenever females defend their offspring against male aggression, often alone but sometimes in groups, males defer to females. But even more interestingly, females are more likely to win conflicts against males during times when they exhibit sexual swellings indicating elevated fecundity.

Dr. Martin Surbeck, first author of the publication, says: "In those situations, males also aggress females less often, which is different from chimpanzees, our other closest living relatives." The results indicate that in bonobos both female sexuality and male mating strategies are involved in the shifting dominance relationships between the sexes.