An Australian–US team of climate researchers has solved a puzzle that has challenged scientists for over a decade. Climate models predict that the equatorial Pacific trades should weaken with increasing greenhouse gases. Yet, since the early 1990s, satellites and climate stations reveal a rapid and unprecedented strengthening of the Pacific trade winds, accelerating sea level rise in the western Pacific and impacting both Pacific and global climate.

"The answer to the puzzle is that recent rapid Atlantic Ocean warming has affected climate in the Pacific," say the scientists. Their findings from observations and modeling experiments are published in the August 3, 2014, online issue of Nature Climate Change.

"We were surprised to find that the main cause of the Pacific wind, temperature, and sea level trends over the past 20 years lies in the Atlantic Ocean," says Shayne McGregor at the University of New South Wales and lead author of the study. "We saw that the rapid Atlantic surface warming observed since the early 1990s, induced partly by greenhouse gasses, has generated unusually low sea level pressure over the tropical Atlantic. This, in turn, produces an upward motion of the overlying air parcels. These parcels move westward aloft and then sink again in the eastern equatorial Pacific, where their sinking creates a high pressure system. The resulting Atlantic–Pacific pressure difference strengthens the Pacific trade winds."

"Stronger trade winds in the equatorial Pacific also increase the upwelling of cold waters to the surface. The resulting near-surface cooling in the eastern Pacific amplifies the Atlantic–Pacific pressure seesaw, thus further intensifying the trade winds," says Axel Timmermann, corresponding author of the study at the University of Hawaii International Pacific Research Center. He comments further, "It turns out that the current generation of climate models underestimates the extent of the Atlantic–Pacific coupling, which means that they cannot properly capture the observed eastern Pacific cooling, which has contributed significantly to the leveling off, or the hiatus, in global warming." 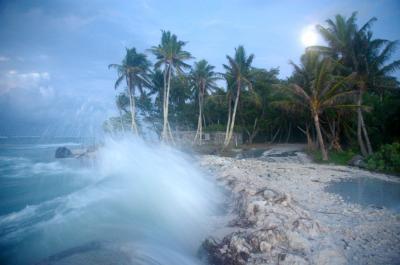 This image depicts waves crashing over a roadway in Temwaiku, Kiribati.

In contrast to previous studies that explain the eastern Pacific cooling as resulting solely from natural climate variability, the international climate research team points to a climate feedback that has been overlooked, namely, that the recent Atlantic warming affects the atmospheric circulation over the Pacific, leading to an increased persistence of cold ocean conditions there.

"It will be difficult to predict when the Pacific cooling trend and its contribution to the global warming hiatus will come to an end. The natural variability of the Pacific, associated for instance with the El Niño-Southern Oscillation, is one candidate that could drive the system back to a more even Atlantic–Pacific warming situation," says co-author Matthew England from the University of New South Wales.

"Our study documents that some of the largest tropical and subtropical climate trends of the past 20 years are all linked: Strengthening of the Pacific trade winds, acceleration of sea level rise in the western Pacific, eastern Pacific surface cooling, the global warming hiatus, and even the massive droughts in California," explains co-author Malte Stuecker from the University of Hawaii Meteorology Department.

"We are just starting to grasp the scope of the impacts of this global atmospheric reorganization and of the out-of phase temperature trends in the Atlantic and Pacific regions," adds Fei-Fei Jin, climate scientist also at the University of Hawaii Meteorology Department.