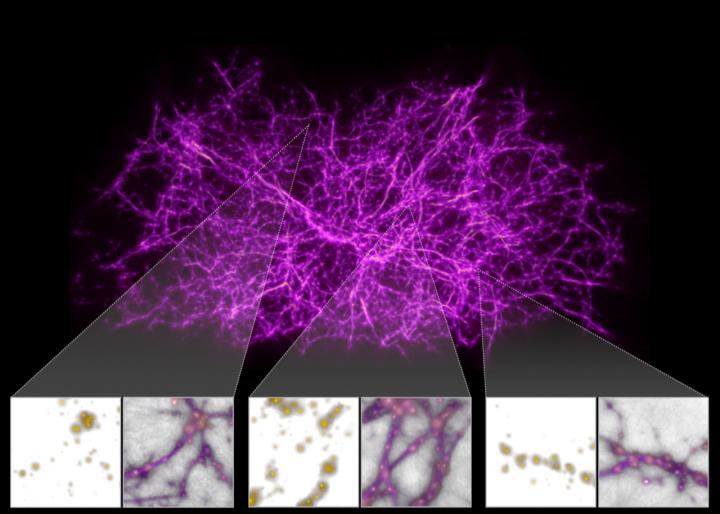 image: This reconstruction of the cosmic web using 37,662 galaxies from the Sloan Digital Sky Survey (SDSS) was generated by the Monte Carlo Physarum Machine, an algorithm based on the growth patterns of a slime mold. Top: Large-scale visualization of the emergent structure identified by the slime mold algorithm. This intricate filamentary network is reconstructed given only the SDSS galaxy coordinates, redshifts, and masses. Bottom: Three individual regions showing the underlying SDSS galaxies on the left and the superimposed filament density field on the right.

A computational approach inspired by the growth patterns of a bright yellow slime mold has enabled a team of astronomers and computer scientists at UC Santa Cruz to trace the filaments of the cosmic web that connects galaxies throughout the universe.

Their results, published March 10 in Astrophysical Journal Letters, provide the first conclusive association between the diffuse gas in the space between galaxies and the large-scale structure of the cosmic web predicted by cosmological theory.

According to the prevailing theory, as the universe evolved after the big bang, matter became distributed in a web-like network of interconnected filaments separated by huge voids. Luminous galaxies full of stars and planets formed at the intersections and densest regions of the filaments where matter is most concentrated. The filaments of diffuse hydrogen gas extending between the galaxies are largely invisible, although astronomers have managed to glimpse parts of them.

None of which seems to have anything to do with a lowly slime mold called Physarum polycephalum, typically found growing on decaying logs and leaf litter on the forest floor and sometimes forming spongy yellow masses on lawns. But Physarum has a long history of surprising scientists with its ability to create optimal distribution networks and solve computationally difficult spatial organization problems. In one famous experiment, a slime mold replicated the layout of Japan's rail system by connecting food sources arranged to represent the cities around Tokyo.

Joe Burchett, a postdoctoral researcher in astronomy and astrophysics at UC Santa Cruz, had been looking for a way to visualize the cosmic web on a large scale, but he was skeptical when Oskar Elek, a postdoctoral researcher in computational media, suggested using a Physarum-based algorithm. After all, completely different forces shape the cosmic web and the growth of a slime mold.

But Elek, who has always been fascinated by patterns in nature, had been impressed by the Physarum "biofabrications" of Berlin-based artist Sage Jenson. Starting with the 2-dimensional Physarum model Jenson used (originally developed in 2010 by Jeff Jones), Elek and a friend (programmer Jan Ivanecky) extended it to three dimensions and made additional modifications to create a new algorithm they called the Monte Carlo Physarum Machine.

Burchett gave Elek a dataset of 37,000 galaxies from the Sloan Digital Sky Survey (SDSS), and when they applied the new algorithm to it, the result was a pretty convincing representation of the cosmic web.

"That was kind of a Eureka moment, and I became convinced that the slime mold model was the way forward for us," Burchett said. "It's somewhat coincidental that it works, but not entirely. A slime mold creates an optimized transport network, finding the most efficient pathways to connect food sources. In the cosmic web, the growth of structure produces networks that are also, in a sense, optimal. The underlying processes are different, but they produce mathematical structures that are analogous."

Elek also noted that "the model we developed is several layers of abstraction away from its original inspiration."

Of course, a strong visual resemblance of the model results to the expected structure of the cosmic web doesn't prove anything. The researchers performed a variety of tests to validate the model as they continued to refine it.

Until now, the best representations of the cosmic web have emerged from computer simulations of the evolution of structure in the universe, showing the distribution of dark matter on large scales, including the massive dark matter halos in which galaxies form and the filaments that connect them. Dark matter is invisible, but it makes up about 85 percent of the matter in the universe, and gravity causes ordinary matter to follow the distribution of dark matter.

Burchett's team used data from the Bolshoi-Planck cosmological simulation--developed by Joel Primack, professor emeritus of physics at UC Santa Cruz, and others--to test the Monte Carlo Physarum Machine. After extracting a catalog of dark matter halos from the simulation, they ran the algorithm to reconstruct the web of filaments connecting them. When they compared the outcome of the algorithm to the original simulation, they found a tight correlation. The slime mold model essentially replicated the web of filaments in the dark matter simulation, and the researchers were able to use the simulation to fine-tune the parameters of their model.

"Starting with 450,000 dark matter halos, we can get an almost perfect fit to the density fields in the cosmological simulation," Elek said.

Burchett also performed what he called a "sanity check," comparing the observed properties of the SDSS galaxies with the gas densities in the intergalactic medium predicted by the slime mold model. Star formation activity in a galaxy should correlate with the density of its galactic environment, and Burchett was relieved to see the expected correlations.

Now the team had a predicted structure for the cosmic web connecting the 37,000 SDSS galaxies, which they could test against astronomical observations. For this, they used data from the Hubble Space Telescope's Cosmic Origins Spectrograph. Intergalactic gas leaves a distinctive absorption signature in the spectrum of light that passes through it, and the sight-lines of hundreds of distant quasars pierce the volume of space occupied by the SDSS galaxies.

"We knew where the filaments of the cosmic web should be thanks to the slime mold, so we could go to the archived Hubble spectra for the quasars that probe that space and look for the signatures of the gas," Burchett explained. "Wherever we saw a filament in our model, the Hubble spectra showed a gas signal, and the signal got stronger toward the middle of filaments where the gas should be denser."

In the densest regions, however, the signal dropped off. This too matched expectations, he said, because heating of the gas in those regions ionizes the hydrogen, stripping off electrons and eliminating the absorption signature.

"For the first time now, we can quantify the density of the intergalactic medium from the remote outskirts of cosmic web filaments to the hot, dense interiors of galaxy clusters," Burchett said. "These results not only confirm the structure of the cosmic web predicted by cosmological models, they also give us a way to improve our understanding of galaxy evolution by connecting it with the gas reservoirs out of which galaxies form."

Burchett and Elek met through coauthor Angus Forbes, an associate professor of computational media and director of the UCSC Creative Coding lab in the Baskin School of Engineering. Burchett and Forbes had begun collaborating after meeting at an open mic night for musicians in Santa Cruz, focusing initially on a data visualization app, which they published last year.

Forbes also introduced Elek to the work of Sage Jenson, not because he thought it would apply to Burchett's cosmic web project, but because "he knew I was a nature pattern freak," Elek said.

Coauthor J. Xavier Prochaska, a professor of astronomy and astrophysics at UCSC who has done pioneering work using quasars to probe the structure of the intergalactic medium, said, "This creative technique and its unanticipated success highlight the value of interdisciplinary collaborations, where completely different perspectives and expertise are brought to bear on scientific problems."

Forbes' Creative Coding lab combines approaches from media arts, design, and computer science. "I think there can be real opportunities when you integrate the arts into scientific research," Forbes said. "Creative approaches to modeling and visualizing data can lead to new perspectives that help us make sense of complex systems."