Another step towards understanding the quantum behavior of cold atoms

This news release is available in Spanish.

The UPV/EHU physicist Eneko Malatsetxebarria has explored, on a theoretical level, some quantum effects that take place in atoms at a very low temperature. Firstly, he has discovered that boson-type atoms and fermion-type ones can be mixed in a specific way. So he has made the necessary conditions for carrying out these experiments available to experimental physicists. Secondly, he has deduced how fermions would influence bosons in this case.

The experiments carried out on cold atoms are very important for understanding quantum physics.In actual fact, they provide anopportunity to observe quantum effects directly. Cold atoms are known as quantum simulators for that very reason. In the words of Eneko Malatsetxebarria, who has done his thesis in this field at the DIPC (Donostia International Physics Center) and at the Centre for Materials Science, "it is a very powerful tool for understanding the behaviour of condensed matter. It is not like before when quantum effects were something that occurred inside a black box; now we are capable of manipulating atoms almost as we want and observing the quantum effects."

In any case, experiments with cold atoms are complicated. Alkaline gas atoms have to be cooleddown to near to absolute zero (–273.15 ºC), and this calls for very complex equipment and techniques equipped with laser and magnetic traps.And this is very costly. "Worldwide, there'll be 30 labs at the most conducting these experiments at the highest level," added Malatsetxebarria.

That is why it is so important to conduct theoretical research in this field. By making use of the theoretical tools of quantum physics, it is possible to explore fields that go beyond the technical obstacles of experiments, and thus understand the special effects that arise out of atom interaction.This has been the field of work of Malatsetxebarria and his PhD thesis supervisor, Miguel Angel Cazalilla. They have been in contact with experimental groups in Germany and Japan, and taking the work of these researchers as the basis, they have put forward proposals for new experiments. 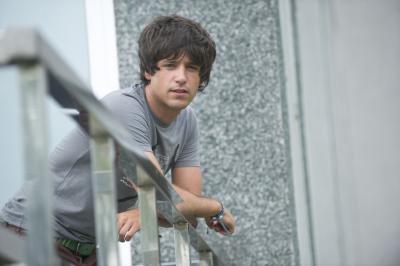 The UPV/EHU-University of the Basque Country physicist Eneko Malatsetxebarria has explored the quantum effects produced when bosons and fermions are mixed at a very low temperature.

Firstly, they have determined the conditions under which boson and fermion atoms can be mixed. It can be said that when quantum effects are taken into consideration, elementary particles are of two types: bosons and fermions. As atoms are made up of these particles in different combinations, they will also be of one type or the other, boson or fermion ones, and as a result, their quantum behaviour will be different. So far, very few experiments have been conducted involving the mixing of bosons and fermions. "Sometimes they are like oil and water and they won't mix; other times, the attraction force is too strong and the system collapses," pointed out Malatsetxebarria. In a paper in the prestigious journal Physical Review he demonstrated the conditions under which they can be mixed. In the system he analysed in the journal, bosons are found in a single dimension, like a line of marbles; while fermions can be found in three dimensions as a kind of cloud. There's nothing random about the choice of that geometry.When passing from one to three dimensions, the interaction between the atoms is qualitatively different on a quantum level too, which is why experimental groups have also recognised their importance when exploring the systems.

Having reached this point, the next step was to explore the effect that fermions might have on bosons. If the bosons that are in a single dimension are represented as if they were marbles inside a cloud, two things can take place: in one case, the marbles will be unable to move. At the most they will vibrate a little, knock against the ones beside them and remain in the same place. It is the insulator state. "That is what occurs with electricity: if electrons move, you have current; if they can't move, you have an insulator. Here we have the same thing, but with atoms," pointed out Malatsetxebarria. But something that is counter-intuitive can also happen: "atoms may hop; then a kind of flow is produced. In that state we don't have loose atoms beside each other, but a mass that flows. We call that state superfluidity."

Two states can exist within a single dimension.And experimentally, by adjusting the lasers, it is also possible to pass from one state to another. It is precisely that transition phase that UPV/EHU researchers have studied. "We wanted to know whether the confinement phase was moving towards one side or the other when fermions were added," explained Malatsetxebarria.

The medium-field theory method has been used until now to study these systems; but the UPV/EHU researchers saw it was insufficient for obtaining reliable results. According to Malatsetxebarria, "in two papers on research into the effect of fermions on bosons, for example, opposite results were obtained using this method. We used another technique that was more complex and which had a broad mathematical basis: the theory of renormalisation groups. And we saw that the main effect of the fermions was to increase the superfluid state."

That is what happens when the fermions find themselves in three dimensions and the bosons in one. In Malatsetxebarria's view, something similar to the screening of electrons in solids must take place. "In solid state there could be an electron among the nuclei of the atoms. As electrons have a negative charge and the nuclei a positive one, the electrons weaken the interaction between the two nuclei. Something similar must happen here, we have interactions between bosons, and the fermion cloud is weakened; after that fluidity increases."