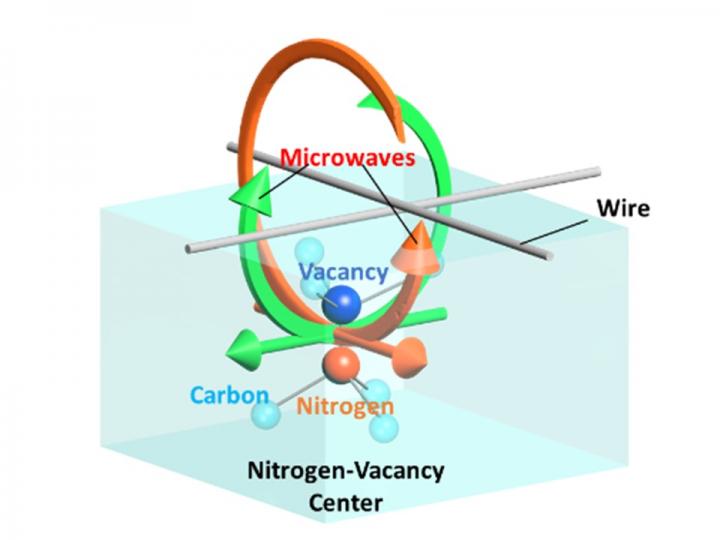 IMAGE: This is a nitrogen-vacancy (NV) center in diamond with two crossed wires for holonomic quantum gates over the geometric spin qubit with a polarized microwave.

Yokohama, Japan - Researchers have demonstrated holonomic quantum gates under zero-magnetic field at room temperature, which will enable the realization of fast and fault-tolerant universal quantum computers.

A quantum computer is a powerful machine with the potential to solve complex problems much faster than today's conventional computer can. Researchers are currently working on the next step in quantum computing: building a universal quantum computer.

The paper, published in the journal Nature Communications, reports experimental demonstration of non-adiabatic and non-abelian holonomic quantum gates over a geometric spin qubit on an electron or nitrogen nucleus, which paves the way to realizing a universal quantum computer.

The geometric phase is currently a key issue in quantum physics. A holonomic quantum gate manipulating purely the geometric phase in the degenerate ground state system is believed to be an ideal way to build a fault-tolerant universal quantum computer. The geometric phase gate or holonomic quantum gate has been experimentally demonstrated in several quantum systems including nitrogen-vacancy (NV) centers in diamond. However, previous experiments required microwaves or light waves to manipulate the non-degenerate subspace, leading to the degradation of gate fidelity due to unwanted interference of the dynamic phase.

"To avoid unwanted interference, we used a degenerate subspace of the triplet spin qutrit to form an ideal logical qubit, which we call a geometric spin qubit, in an NV center. This method facilitated fast and precise geometric gates at a temperature below 10 K, and the gate fidelity was limited by radiative relaxation," says the corresponding author Hideo Kosaka, Professor, Yokohama National University. "Based on this method, in combination with polarized microwaves, we succeeded in manipulation of the geometric phase in an NV center in diamond under a zero-magnetic field at room temperature."

The group also demonstrated a two-qubit holonomic gate to show universality by manipulating the electron-nucleus entanglement. The scheme renders a purely holonomic gate without requiring an energy gap, which would have induced dynamic phase interference to degrade the gate fidelity, and thus enables precise and fast control over long-lived quantum memories, for realizing quantum repeaters interfacing between universal quantum computers and secure communication networks.