Beluga whales and narwhals live solely in the cold waters of the Arctic and sub-arctic. Smithsonian scientists, however, found that this may not have always been the case. They recently described a new species of toothed whale and close relative to today's belugas and narwhals that lived some 3-4 million years ago during the Pliocene in warm water regions.

Why and when its modern-day relatives evolved to live only in northern latitudes remains a mystery. The team's research was recently described in the Journal of Vertebrate Paleontolog.

This new species, Bohaskaia monodontoides, is known only from a nearly complete skull found in 1969 in a mine near Hampton, Va.

Since its discovery, the skull has been housed in the paleontology collections of the Smithsonian's National Museum of Natural History. It was loosely identified as belonging to a beluga whale but it had never been closely studied. 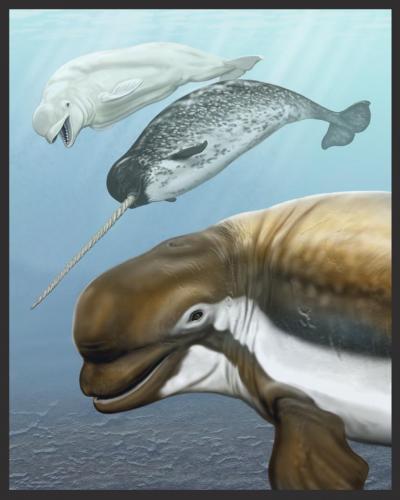 This is an artist's conception of Bohaskaia monodontoides, foreground. Behind and above are a modern-day beluga whale and narwhal.

In 2010, Jorge Velez-Juarbe, Smithsonian predoctoral fellow from Howard University, and Nicholas Pyenson, research geologist of the Smithsonian's National Museum of Natural History began a close anatomical comparison of the fossil skull with the skeletons of belugas and narwhals in the Smithsonian's collection.

Their study confirmed that the fossil skull was that of a new toothed whale species―one that shared features of the snout and face with belugas and narwhals. The fossil skull contained enough unique features however, to merit its placement as a new genus and species.

"Fossils referred to as belugas have been known from fragmentary bits, but skulls are so revealing because they contain so many informative features," Pyenson says. "We realized this skull was not something assignable to a beluga, and when we sat down, comparing the fossil side by side with the actual skulls of belugas and narwhals, we found it was a very different animal." 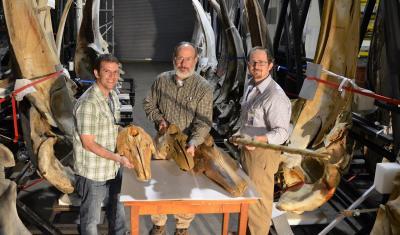 Smithsonian scientists (left to right) Jorge Velez-Juarbe holds the skull of beluga whale; Dave Bohaska holds the skull of Bohaskaia monodontoides; and Nicholas Pyenson with the skull and tusk of a narwhal. They are standing in the marine mammal collections area of the Smithsonians National Museum of Natural History.

As Bohaskaia monodontoides was found in the temperate climate of Virginia, and a second extinct beluga-related toothed whale, Denebola branchycephala is known from a fossil found in Baja California, Velez-Juarbe and Pyenson surmise that the cold-climate adaptations of narwhals and beluga, which today live and breed only in the Arctic and sub-arctic, must have evolved only recently.

The change may be "related to oceanographic changes during or after the Pliocene affecting the marine food chain," Velez-Juarbe says, "then competition or dietary preferences drove monodontids further north." 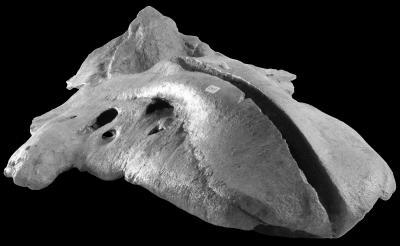