Researchers at the Max Planck Institute for Evolutionary Anthropology in Leipzig, Germany, and the Senckenberg Research Institute in Frankfurt am Main, Germany, have conducted stress analyses on gorilla teeth of differing wear stages. Their findings show that different features of the occlusal surface antagonize tensile stresses in the tooth to tooth contact during the chewing process. They further show that tooth wear with its loss of dental tissue and the reduction of the occlusal relief decreases tensile stresses in the tooth. The result, however, is that food processing becomes less effective. Thus, when the condition of the occlusal surface changes during an individual's lifetime due to tooth wear, the biomechanical requirements on the existing dental material change as well – an evolutionary compromise for longer tooth preservation. 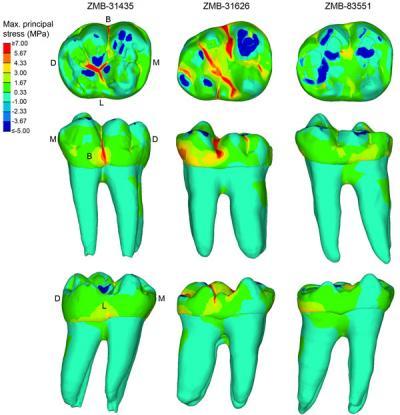 The results show that in unworn and slightly worn molars (with a well-formed occlusal relief that is most effective for processing food) tensile stresses concentrate in the grooves of the occlusal surface. In such a condition, the different crests of a molar carry out important biomechanical functions, for example, by reinforcing the crown against stresses that occur during the chewing process. Due to a loss of tooth tissue and a reduction of the occlusal relief the functionality of these crests diminishes during an individual's lifetime. However, this reduced functionality of the crests in worn teeth is counterbalanced by an increase in contact areas during tooth to tooth contacts, which ultimately contributes to a dispersion of the forces that affect the occlusal surface.

This suggests that the wear process might have a crucial influence in the evolution and structural adaptation of molars enabling to endure bite forces and to reduce tooth failure throughout the lifetime of an individual. "It seems that we observe an evolutionary compromise for long tooth preservation. Even though worn teeth are not as efficient they still fulfill their task. This would not be the case if they were lost prematurely", says Stefano Benazzi of the Max Planck Institute for Evolutionary Anthropology. He adds: "Tooth evolution and dental biomechanics can only be understood, if we further investigate tooth function in respect to the dynamic changes of tooth structures during the lifespan of individuals".

"The results have strong implications for understanding the functional biomechanics of dental traits, for deciphering the evolutionary trend of our masticatory apparatus and might have important implications in modern dentistry for improving dental treatments", says Jean-Jacques Hublin, director of the Department of Human Evolution at the Max Planck Institute for Evolutionary Anthropology.