ALBUQUERQUE, N.M. — An alloy that may improve high-temperature electronics in oil and geothermal wells was really a solution in search of a problem.

Sandia National Laboratories first investigated the gold-silver-germanium alloy about 15 years ago as a possible bonding material in a new neutron tube product. But a design change forced Sandia to shelve the material, said Paul Vianco, who has worked in soldering and brazing technology at Sandia for 26 years.

Then a few years ago, researchers working on other projects with applications inside a well, referred to as downhole, asked Sandia's geothermal group to develop electronics to monitor well conditions in field operations. Circuit boards placed downhole in oil and geothermal wells must withstand high temperatures and pressures, excessive vibrations and other extreme environments.

The gold-silver-germanium alloy is suitable for those conditions, Vianco said.

Most brazing processes occur at a peak temperature above about 700 degrees C, while most soldering occurs below 350 degrees C, leaving high-temperature electronics few filler materials from which to choose.

"So there's this no man's land in which the only materials that are available are aluminum-based brazing alloys that melt at about 600 degrees C," Vianco said. But aluminum-based alloys are difficult to process for electronics.

In addition, the gold-silver-germanium alloy is lead-free, making it environmentally friendly for geothermal work in countries such as Iceland, which, like the rest of Europe, is moving away from materials that contain lead. The alloy's fundamental mechanical and processing properties also are nearly fully characterized. That's important because it saves about two years of development that would be required to establish how well the alloy makes a reliable solder joint, Vianco said.

"All that's done," he said. "We have the preliminary work completed that allows us to consider this material for a range of applications, including downhole electronics." 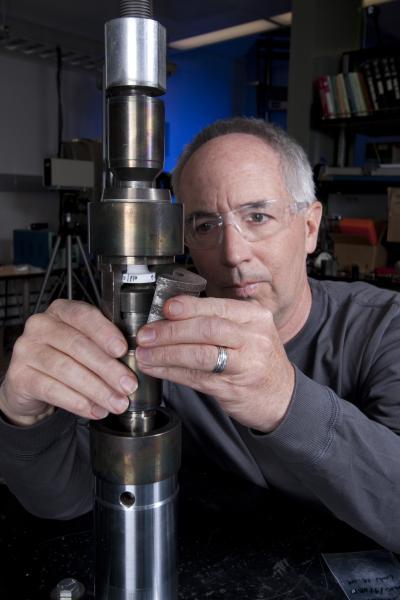 Sandia National Laboratories researcher Tom Crenshaw sets up a specimen in a test frame that will pull a solder joint apart to determine its tensile strength. He co-authored a paper that won the Best of Proceedings category in the Surface Mount Technology Association International 2012 Best Papers conference.

The alloy originally was developed from the gold-germanium system, which has traditionally been a die attachment material used in microelectronics packaging. But a higher melting temperature was required for the neutron tube application, so Vianco and colleagues John J. Stephens, now deceased, and F. Michael Hosking, now retired, added silver and adjusted the concentrations to reach a near-uniform melting point for the alloy.

"It was so close to brazing that we didn't think that there would be much interest in the electronics industry until the option came up for downhole applications," Vianco said.

He is now seeking funds to develop the material to a prototype stage for geothermal and oil and gas well tools. "We really think it is a material that's suitable for these higher temperature applications," Vianco said. "In this no man's land of filler metal technology, there are really not a lot of options out there other than lead-containing alloys. Companies are exploring lead-bearing solders, albeit begrudgingly so."

When interest in downhole applications arose, Vianco and his colleagues needed to pull together information on the alloy from the mid-1990s. They resurrected the data and re-evaluated it, and Vianco wrote a paper assessing its properties.

"Photographs were all on film; we had to scan these pictures into an electronic format. Documents and presentations were in unusable formats or archived on software that is no longer supported by the labs.

So everything was brought up to a level that is compatible with current computer resources," Vianco said.

The paper, "Ag-Au-Ge Alloys for High Temperature Geothermal and Oil Well Electronics Applications," won the Best of Proceedings category in the Surface Mount Technology Association International 2012 Best Papers conference announced in January. Vianco will receive the award at SMTA's meeting in October in Fort Worth, Texas.

He wrote the paper largely to compile the data in case interest developed within the oil, gas and geothermal industries, and hadn't planned to submit it for publication. But SMTA International, aware of Sandia's leadership role in soldering technology, asked the labs to provide a paper for a session on alternative solders for electronic applications, so Vianco submitted it.

He believes Sandia might be able to use the gold-silver-germanium alloy as a joining material in high-precision components.

The paper and the publicity surrounding the award have raised awareness of the alloy and the growing need for high-temperature materials to support downhole electronics, Vianco said.

"This is how tech transfer works the best — publish the material and let the folks who have the need become aware of it and then work with their specific applications," he said.