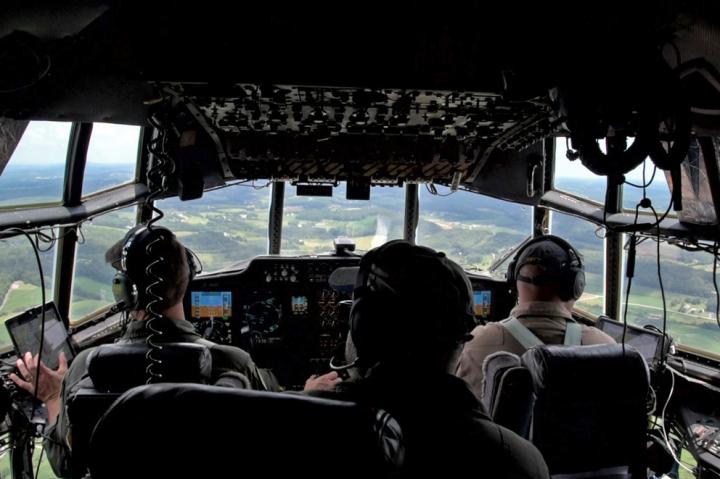 IMAGE: In a series of flights during NASA's ACT-America campaign, Penn State researchers measured methane plumes in the atmosphere over portions of south central US. The researchers found measurements of methane...

Approximately twice as much methane is seeping into the atmosphere than the Environmental Protection Agency estimates from oil and gas facilities in the south central U.S., according to a series of measurements taken by meteorologists using NASA aircraft.

In six flights through the region, researchers used onboard instruments from two planes to collect data roughly 1,000 feet above ground. They flew through massive methane plumes concentrated by regional weather patterns and used sample points and weather models to determine the actual methane concentrations of the plumes. These concentrated plumes were discovered during the Atmospheric Carbon and Transport-America (ACT-America) campaign, a much broader Penn State led-effort to understand greenhouse sources and sinks.

Researchers found methane from oil and gas facilities to be 1.1 to 2.5 times greater than EPA estimates for the region that includes Arkansas, Texas, Louisiana and Oklahoma. In another key finding, scientists showed how frontal systems in the atmosphere can be used to track methane from much larger areas at the surface because large plumes of methane concentrations come together along the frontal boundary.

"When we flew across cold fronts, one thing we noticed was that warm air was being pulled up and funneling the region's greenhouse gases into large plumes," said Zach Barkley, researcher in meteorology and atmospheric science, Penn State. "We fed data from these plumes into our weather models and, when we compared the data with the EPA inventory, we saw there was a discrepancy."

Methane comes from many sources -- including wetlands, animal agriculture and the oil and natural gas industry -- so researchers used ethane measurements to determine the source. Ethane is primarily found in methane produced by the natural gas industry, so researchers used that to omit methane produced by animal agriculture and other natural sources. The findings are reported in a recent issue of Geophysical Research Letters.

The EPA uses a bottom-up approach to estimate methane emissions from industry by applying a value to each well and transport component. Penn State researchers used a top-down approach, meaning the emissions were measured at their endpoint, the atmosphere.

"The one issue with the bottom-up approach is if you can't sample enough sources to get an accurate representation of the average," Barkley said. "When you multiply by all of the different devices and components across the U.S., you could potentially come up with a number that's not accurate."

The region is important to combating greenhouse gas emissions at large, Barkley said, because it accounts for nearly 40 percent of the man-made methane emissions in the U.S. The region is a hotspot for both natural gas extraction and animal agriculture. Methane is an important greenhouse gas with 34 times the warming potential of carbon dioxide over a 100-year period, according to the Intergovernmental Panel on Climate Change.

Barkley said there are also problems with the top-down approach to measuring methane. It is more expensive and does not identify which sources are emitting methane. He said the approach is more of a check on the accuracy of the existing approach.

But it does point to areas to target for greenhouse gas reduction.