Conservationists from the Wildlife Conservation Society, the American Museum of Natural History, and other conservation and research groups have discovered that groups of dolphins in the western Indian Ocean do not mix freely with one another. In fact, dolphin populations are kept separate by currents and other unseen factors.

Specifically, the researchers have found that genetically distinct populations of the Indo-Pacific humpback dolphin may be formed in part by currents, surface temperature differences, and other environmental barriers, a finding made possible by using both genetic data from dolphins and environmental information from remote-sensing satellites.

The study represents a breakthrough in high-tech research on marine wildlife and a foundation for ensuring sound future management decisions on the Indo-Pacific humpback dolphin, a distant relative of the more familiar bottlenose dolphin. It is one of the first examinations of how environmental factors in marine environments can influence population structure in marine species, and can potentially enhance an understanding about the environmental factors that may drive the evolution of new species.

This is an Indo-Pacific humpback dolphin from the coastal waters of Oman, a country on the southeast coast of the Arabian Peninsula. Researchers from the Wildlife Conservation Society, the American Museum of Natural History, and other partners have examined how currents, temperature differences, and other environmental factors influence populations of Indo-Pacific humpback dolphins in the western Indian Ocean. They used remote-sensing data from satellites to inform genetic comparisons of different dolphin populations.

"Examining how environmental factors affect the population structure of marine species is a complex task. Doing this over entire regions is a challenge," said lead author Dr. Martin Mendez of the Sackler Institute for Comparative Genomics at the American Museum of Natural History. "Unlike studies of terrestrial species in easily observable environments, marine species are difficult to follow and the barriers they encounter are often invisible to us. Molecular technologies and remote sensing data can be combined to shed light on these mysteries."

The researchers then compared their molecular findings with 13 years of data from NASA's satellites on environmental factors such as currents, temperature, turbidity, levels of chlorophyll, and dissolved organic matter.

Dr. Mendez and his co-authors have succeeded in finding support for the hypothesis that environmental differences between regions could influence the population structure of marine species. Specifically, they found correlations between regional environmental differences and measurable genetic breaks between populations of dolphins from Mozambique and Tanzania in Africa, and Oman on the Saudi Arabian peninsula. 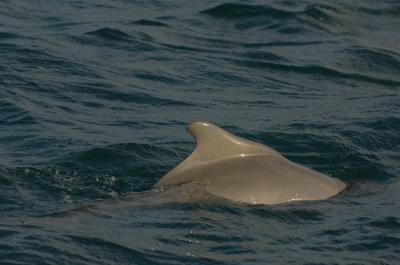 Occurring in mostly coastal habitats stretching from the western Indian Ocean to Australian waters, the Indo-Pacific humpback dolphin gets its name from the distinctive hump just below the marine mammals dorsal fin (as in this individual animal from the coast of northwest Madagascar.Photo credit:

On the largest regional scale, data on currents seem to correlate with genetic distinctiveness between certain populations. In particular, the South Equatorial Current—which runs west across the Indian Ocean before diverging north and south as it meets the African continent—seems to represent a barrier between genetically distinct populations of Mozambique and Tanzania; the current may play a role in creating them. Seasonal monsoons also potentially contribute to what researchers found was a lack of southbound migration (or detectable gene flow) along the African coast.

The researchers also found agreement on smaller spatial scales. Differences in temperature, chlorophyll, turbidity, and dissolved organic matter between regions also coincided with genetic differences between dolphin populations in Mozambique, Tanzania, and Oman. The two coastal regions without detectable genetic distinctiveness between dolphin populations—Mozambique and South Africa—also lacked significant environmental differentiation between them, a finding in agreement with the correlation of both genetic and environmental differences detected in other areas.

"With increasing development and potential threats to coastal habitats, understanding the population structure of the Indo-Pacific humpback dolphin in conjunction with environmental factors is an important step in formulating management recommendations and protection measures for the species," said Dr. Howard Rosenbaum, Director of the Wildlife Conservation Society's Ocean Giants Program. 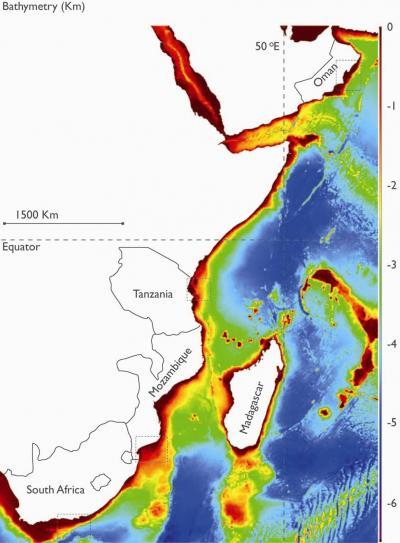 Researchers used environmental data from remote sensing satellites (such as ocean depth in this figure) to examine the genetic distinctiveness of dolphin populations located off the coasts of Oman, Tanzania, Mozambique, and South Africa.