Adolescent female pandas not the demure homebodies once thought

In the furry animal world, it's the boys approaching adulthood who tend to start to wander to seek their fortune. Which usually means a mate. Girls tend to stay closer to the home range.

But giant pandas, once again, buck a mammal trend.

Michigan State University PhD student Thomas Connor continues an effort begun by his colleague Vanessa Hull to try to combine MSU's data-rich effort in tracking five pandas with GPS collars with other similar studies. The goal: parse out a better understanding at how these elusive bears behave in their remote environs in southwestern China. Hull is a co-author on the current paper. 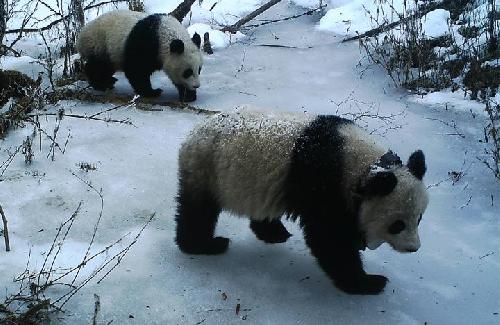 The paper "Telemetry research on elusive wildlife: a synthesis of studies on giant pandas" in this month's Integrative Zoology discovers that the several small studies of pandas wearing tracking collars gain new significance when compared with a broader history.

His review of the data from five studies teased out tantalizing insights into how the endangered pandas behave. It's important to understand as climate change and human development require detailed intelligence on how they live, and thus how they can best be protected while the needs of the people who live amongst them are met.

"So much is still unknown about how pandas use their habitat," said Jianguo "Jack" Liu, Rachel Carson Chair in Sustainability and Center for Systems Integration and Sustainability director. "Pandas are a part of coupled human and natural systems where humans share their habitat. Anything we can learn about how they live and what they need can ultimately help inform good conservation policies."

Connor says females seem to rival the males in distances moved from home during mating season, a behavior overlooked in previous small studies that seemed to indicate the females waited around for male callers. He says there's also evidence that the "subadult" females -- think adolescents -- tend to disperse further than males, though they may return near their original home range to give birth and raise their cubs. A 2001 book notes this roaming behavior is not without risk for the females. One ventured far and returned home emaciated and wounded and later died.

"The tendency for female natal dispersal is an interesting behavioral adaptation that is uncommon in mammals, and not found in any other bear species," Connor said.

The pandas in the studies live in two mountain ranges - the Qionglai range, where the famous Wolong Nature Reserve is located, and the Qinling Mountains to the north. Connor said the analysis of the many studies raised enticing new questions. Past studies did not agree on whether the brownish pandas in the Qinling range, which look a bit different from the more familiar Wolong pandas, had smaller or larger home ranges compared to those in the Qionglai.

There is in fact no difference at all, Connor now thinks. He's convinced that despite a larger seasonal migration in the Qinling, pandas in both areas use a similar amount of territory.

As he begins his doctoral work on pandas, Connor found tantalizing bits of information and questions - were the handful of aggressive behaviors witnessed signs of territorial nature? There's evidence that both sexes of pandas play the field in mating season, courting more than one suitor, yet is promiscuous mating an aberration or the norm?

And what's up with those Qinling mountain pandas in a 2001 study that moved to high elevations in the summer, a usual pattern, yet stayed there through the harsh winter months?

"It is fascinating that in a species as well known as the giant panda, there are still so many uncertainties and unanswered questions," Connor said. "In addition to mysteries surrounding their behavior and ecology, much remains unknown concerning the effect of human disturbance on panda individuals and populations. In a time of rapid expansion, but also considerable conservation effort in China, a better understanding of this panda-human interaction is crucial to make these efforts effective in the future."