A stretchable highway for light

WASHINGTON, Feb. 18, 2014—For futuristic applications like wearable body sensors and robotic skin, researchers need to ferry information along flexible routes. Electronics that bend and stretch have become possible in recent years, but similar work in the field of optics – communicating with light instead of electrons – has lagged behind. Particularly difficult to engineer have been optics that stretch, lengthening when someone wearing body sensors bends to tie their shoe, or when a robotic arm twists through a full range of motion.

Now a team of Belgian researchers reports progress on this front with what may be the first optical circuit that uses interconnections that are not only bendable, but also stretchable. These new interconnections, made of a rubbery transparent material called PDMS (poly-dimethylsiloxane), guide light along their path even when stretched up to 30% and when bent around an object the diameter of a human finger.

Furthermore, by integrating these stretchy interconnections into a circuit – with a light source on one end and a detector on the other – the researchers created a miniature stretchable, bendable "link" that could be incorporated into optical communications systems. The team describes its work in a paper published today in The Optical Society's (OSA) open-access journal Optics Express.

"To our knowledge, this is indeed the first truly bendable, stretchable optical link with these miniature dimensions," said lead author Jeroen Missinne of Ghent University and imec, a micro- and nano-electronics research center, in Belgium. 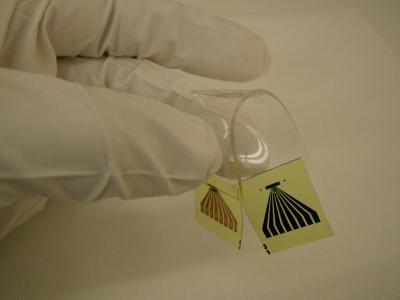 The novel waveguide connects a light source to a detector to make what may be the first truly stretchable optical circuit.

Previously, researchers had created optical interconnections – also called lightguides or waveguides – from other similar rubbery materials. But until now, the researchers say, no one had discovered a way to enable these materials to carry light while stretched. Past efforts also included embedding waveguides made of semi-rigid glass fibers into a stretchable substance. In the new method, the stretchable substance itself is the waveguide.

The new connector consists of two materials, both made of PDMS: a transparent core through which the light travels, surrounded by another transparent layer of PDMS with a lower refractive index, a characteristic of the material that describes how light moves through it. This configuration traps light in the guide's core, causing it to propagate along its length.

Bending a waveguide beyond a certain point causes some of the light trapped in the core to escape, a process called optical loss. The Belgian team tested how far they could bend and stretch their new optical connector before too much light escaped.

"We were surprised that stretching had so little influence on the waveguides and also that their mechanical performance was so good," Missinne said. The guide's reliability was also "remarkable," he said. The researchers did not see a degradation in the material even after mechanically stretching it to a 10 percent elongation 80,000 times.

But, Missinne said, "waveguides are useless if you cannot launch light into them and collect light on the other end. If you want to obtain a truly stretchable optical link, the light sources and detectors need to be integrated together with the stretchable waveguide." In this case, a VCSEL (vertical-cavity surface-emitting laser), commonly used for fiber optic communications, served as the light source, and a photodiode was the detector. This configuration allowed the team to create the first truly stretchable optical interconnector.

Future uses for the new optical link might include building networks of wearable body sensors, moving machine parts such as robotic limbs, and deformable consumer electronics. Meanwhile, the team plans to make their waveguide smaller, down from 50 micrometers to just a few micrometers in diameter, which will also require a redesign of the parts of the waveguide where light enters and exits. 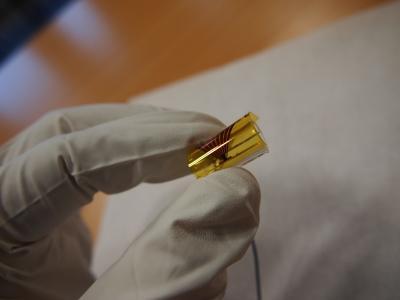 The new optical circuit works when bent around an object about the diameter of a human finger.