A lucky catch: A tiny new fish, Haptoclinus dropi, from the southern Caribbean

A new species of tiny blenniiform fish has been discovered in the biodiversity rich waters of the southern Caribbean. Haptoclinus dropi is only around 2cm in length with a beautiful color pattern that includes iridescence on the fins. The proposed common name of the species is four-fin blenny, due to the division of the dorsal fin into four sections, which is a distinguishing feature of the genus and unique among blenniiform fishes. The study was published in the open access journal Zookeys.

This beautiful new species was discovered as a lucky bycatch during targeted specimen catching at 157-167 m depth off Curaçao as a part of the Smithsonian Institution's Deep Reef Observation Project (DROP). The new species, Haptoclinus dropi, gets its name from the project's abbreviation and is one of numerous new ray-finned fish species emerging from this project. 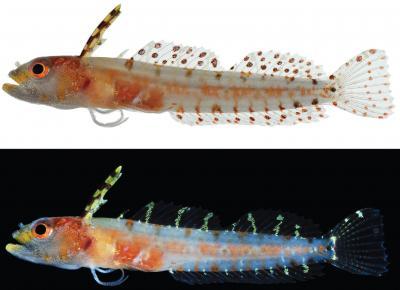 This image shows the beautiful color pattern of the new species Haptoclinus dropi. The iridescence on the fins shows up, luminescing against the black background.

For DROP expeditions the Substation Curaçao's manned submersible Curasub was used to catch specimens. While generally used as tourist attraction because it travels at much greater depths than divers can reach, the Curasub is also used for scientific marine research. Targeted fish specimens are collected with the sub's two flexible, hydraulic arms, but very often small non-targeted fish are also caught in the process. 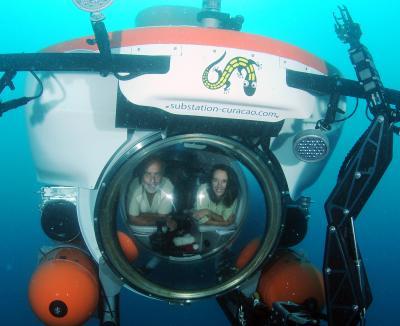 This image shows the Substation Curaçao's manned submersible Curasub which was used to catch specimens for the Smithsonian Institution's Deep Reef Observation Project.

"Below the depths accessible using scuba gear and above the depths typically targeted by deep-diving submersibles, tropical deep reefs are productive ocean ecosystems that science has largely missed. They are home to diverse assemblages of new and rare species that we are only just beginning to understand," explains the lead author of the study Dr Carole Baldwin, Smithsonian Institution. 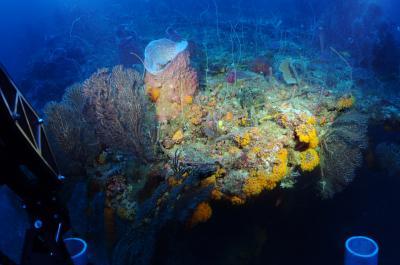 This image shows a deep-reef scene in the underwater world of the southern Caribbean, the home for Haptoclinus dropi.