Different studies have demonstrated that the ebola virus infection process starts when the virus reaches the cellular DC-SIGN receptor to infect the dendritic cells (of the immune system). European researchers have designed a "giant" molecule formed by thirteen fullerenes covered by carbohydrates which, by blocking this receptor, are able to inhibit the cell infection by an artificial ebola virus model.

"Fullerenes are hollow cages exclusively formed by carbon atoms", explains Nazario Martín, Professor of Organic Chemistry in the UCM and main author of the study. In this work, scientists have employed C60 fullerene, which is formed by 60 carbon atoms and has the shape of a truncated icosahedron, which resembles a football ball. 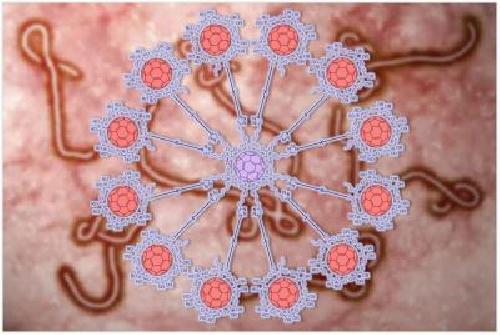 The team has achieved an unprecedented goal: connecting 12 fullerenes, each one endowed with 10 sugar moieties, to other central fullerene, thus mimicking the presentation of carbohydrates surrounding the Ebola virus. Credit: N. Martín & B. Illescas / UCM.

These molecules decorated with specific carbohydrates (sugars) present affinity by the receptor used as an entry point to infect the cell and act blocking it, thus inhibiting the infection.

Researchers employed an artificial ebola virus by expressing one of its proteins, envelope protein GP1, responsible of its entry in the cells. In a model in vitro, this protein is covering a false virus, which is able of cell infection but not of replication.

"We have employed a cell model previously described in our lab which consists in a cell line of human lymphocytes expressing DC-SIGN receptor, which facilitates the entry of the virus in Dendritic Cells", points out Rafael Delgado, researcher of the Hospital 12 de Octubre, and other of the authors of the study.

By blocking this receptor and inhibiting the virus infection, the authors think that the dissemination of the virus would decrease and the immune response increase, but this idea has still to be developed with in vivo studies.

The biggest fullerene system in the lab

The system designed by the chemists, based on carbon nanostructures developed in the UCM, mimic the presentation of carbohydrates surrounding virus like ebola or VIH.

The team has achieved an unprecedented success in fullerene chemistry and dendritic growth: connecting in one synthetic step twelve fullerene units, each with ten sugars, to other central fullerene, creating a globular superstructure with 120 sugar moieties on its surface, "this is the fastest dendrimeric growth developed in a laboratory up to now" says Beatriz Illescas, Professor in the UCM and coauthor of the work.

According to scientists, the results highlight the potential of these giant molecules as antiviral agents. "This work open the door to the design and preparation of new systems to inhibit the pathogens infection in cases where the current therapies are not effective or are inexistent, as occurs with the ebola virus", clarifies Martín.

After these experiments on the cellular level, researchers will study the behavior of these systems in animal models, starting with mice. "We will study, on the one hand, the pharmacokinetics and, on the other, the antiviral activity in vivo" explains Javier Rojo, researcher of the Instituto de Investigaciones Químicas del CSIC and other of the authors of the study. Once the most effective compound has been identified, studies using the true ebola virus could be carried out.