A botanical survey to help understand change in our wild flora

Volunteers in the north-east of England have created a benchmark survey of common plants with which to identify change in the countryside, its result and causes. This survey will be used in future to monitor the effects of climate change on plants; assess the success of conservation measures and predict future change. Its findings are published in the open-access journal Biodiversity Data Journal, contributing an additional 35,000 observations to the 200,000 observations collected by local recorders since the turn of the millennium .

Many people remark on the changes that are occurring in the countryside, the disappearance of some species and the spread of others. Yet, these anecdotes cannot substitute for hard facts. There are also many suggested causes for all these changes such as warmer climate, different agricultural practices, eutrophication, or alien species. Botanical observations tend to be biased. For example, common species are often ignored in the interest of exceptional ones. Therefore, what was needed was a dedicated survey with a clear and repeatable methodology.

Common plant species are the mainstay of habitats, they create our woodlands, hedgerows and meadows. They also provide the food for herbivores and pollinators and create homes for birds and mammals. Changes in the abundance of rare species have little impact on other species, but change in the abundance of common species can have cascading effects on whole ecosystems of which we are a part. 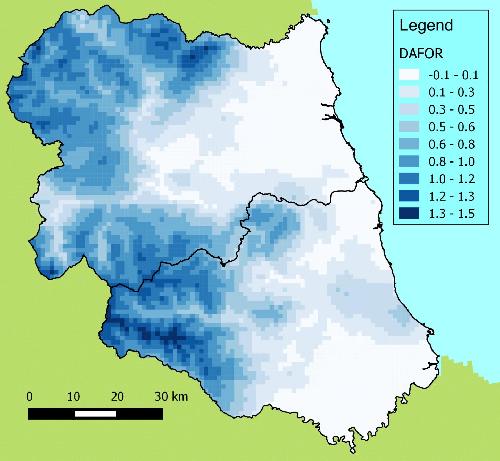 The distribution of heather predicted from the common plant survey data. This is one of the region's most characteristic species and one that many other organisms rely upon for food and cover. Credit: Dr. Quentin Groom

For these reasons volunteer botanists in the north-east of England conducted a four-year survey to benchmark the abundance of common plants. Led by the Botanical Societies vice county recorders, John Durkin Ecology, Botanical Society of Britain and Ireland, and Botanic Garden Meise, the volunteers surveyed the plants in a randomly selected sample of 1km2 grid squares in the vice counties of Durham and South Northumberland.

They created a solid foundation that can be used to qualify the abundance of common species and compare against previous and future studies. The project was conducted over four years and required volunteers to go to various places. Some surveyed post-industrial brown-field sites, while others walked for miles across bleak moorland to reach sites high in the hills. Although these moors are arguably wilder and natural, the industrial wastelands turn out to be far more biodiverse.

"Good biological conservation in the 21st century will have as much to do with sensitive adaption to change as it is about preserving what we have," point out the authors. "Human memory is short and fickle and it is only with benchmark surveys, such as this that we can hope to understand and manage that change."