In the face of mass deforestation of the Amazon, recent findings indicate that we could learn from its earliest inhabitants who managed their farmland sustainably. An international team of archaeologists and paleoecologists, including Dr. Mitchell Power, curator of the Garrett Herbarium at the Natural History Museum of Utah and assistant professor in the Department of Geography at the University of Utah, report for the first time that indigenous people, living in the savannas around the Amazonian forest, farmed without using fire. These findings are published today, April 9, 2012, in the journal Proceedings of the National Academy of Sciences.

The research could provide insights into the sustainable use and conservation of these globally-important ecosystems, which are being rapidly destroyed. Pressure on the Amazonian savannas today is intense, with the land being rapidly transformed for industrial agriculture and cattle ranching.

By analyzing records of pollen, charcoal and other plant remains like phytoliths spanning more than 2,000 years, the team has created the first detailed picture of land use in the Amazonian savannas in French Guiana. This gives a unique perspective on the land before and after the first Europeans arrived in 1492.

The research shows that the early inhabitants of these Amazonian savannas practiced 'raised-field' farming, which involved constructing small agricultural mounds with wooden tools. These raised fields provided better drainage, soil aeration and moisture retention: ideal for an environment that experiences both drought and flooding. The fields also benefited from increased fertility from the muck continually scraped from the flooded basin and deposited on the mounds. The raised-field farmers limited fires, and this helped them conserve soil nutrients and organic matter and preserve soil structure.

"We used radiocarbon dating to establish the age of the raised beds," said Dr. Mitchell Power. We came to the conclusion that corn pollen we found dated to 800 years ago by dating charcoal deposits from above and below the sediment where the pollen was found."

It has long been assumed that indigenous people used fire as a way of clearing the savannas and managing their land. However, this new research shows that this was not the case here. Instead, it reveals a sharp increase in fires with the arrival of the first Europeans, an event known as the 'Columbian Encounter'. The study shows that this labor-intensive approach to farming in the Amazonian savannas was lost when as much as 95 percent of the indigenous population was wiped out as a result of Old World diseases, brought by European settlers.

The results of this study are in sharp contrast with what is known about the Columbian Encounter's impact on tropical forest, where the collapse of indigenous populations after 1492 led to decreased forest clearance for agriculture, which in turn, caused a decline in burning. This study shows that high fire incidence in these Amazonian savannas is a post-1492, rather than pre-1492, phenomenon."Our results force reconsideration of the long-held view that fires were a pervasive feature of Amazonian savannas, said Power"

Dr José Iriarte of the University of Exeter, lead author on the paper, said: "This ancient, time-tested, fire-free land use could pave the way for the modern implementation of raised-field agriculture in rural areas of Amazonia. Intensive raised-field agriculture can become an alternative to burning down tropical forest for slash and burn agriculture by reclaiming otherwise abandoned and new savannah ecosystems created by deforestation. It has the capability of helping curb carbon emissions and at the same time provide food security for the more vulnerable and poorest rural populations." 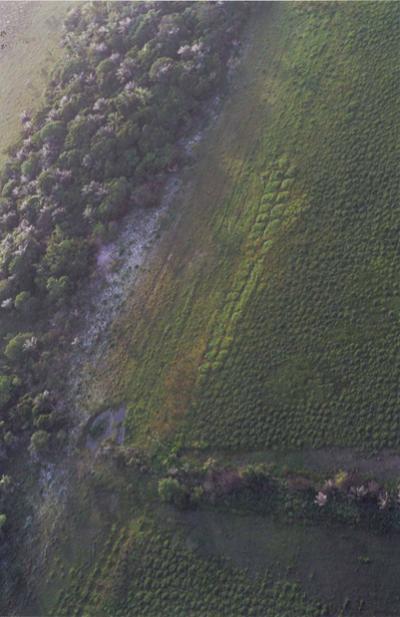 This aerial view of pre-Columbian agricultural raised fields is in the seasonally flooded savannas of French Guiana.

Professor Doyle McKey of the University of Montpellier said: "Amazonian savannas are among the most important ecosystems on Earth, supporting a rich variety of plants and animals. They are also essential to managing climate. Whereas savannas today are often associated with frequent fire and high carbon emissions, our results show that this was not always so. With global warming, it is more important than ever before that we find a sustainable way to manage savannas. The clues to how to achieve this could be in the 2,000 years of history that we have unlocked."

Dr Francis Mayle of the University of Edinburgh said: "We've got an unprecedented record of these Amazonian savannas that completely overturns previous assumptions about the way in which ancient cultures utilized these globally-important ecosystems."

Dr Stephen Rostain of CNRS said "These raised-field systems can be as productive as the man-made black soils of the Amazon, but with the added benefit of low carbon emissions."

The study was carried out by a team from the University of Exeter (UK), Natural History Museum of Utah (US), Centre National de la Recherche Scientifique (France), University of Edinburgh (UK), Université Montpellier II and Centre d'Ecologie Fonctionnelle et Evolutive (France). It was funded by two CNRS Programmes ('Amazonie' and 'Ingénierie Ecologique'), the Arts and Humanities Research Council and The Leverhulme Trust.

The research featured in the PNAS article highlights two areas of active research at the Natural History Museum.

During the past four years at the Natural History Museum of Utah, Dr. Power has been developing a modern pollen reference collection based on vouchered specimens archived in the herbarium collection. The majority of the plant specimens in the herbarium collection were collected during their period of flowering, thus the Museum plant collection provides opportunities to study the plant ecology such as the timing of flowering as well as the pollen morphology for each species. Pollen is preserved in lakes and bogs for thousands of years and the ability to identify plants through there pollen, has allowed Power and this international team of scientists to document the types of crops and natural vegetation present thousands of years ago when raised-field farmers occupied the savannas of coastal French Guiana.

Secondly, the research in French Guiana contributes to an ongoing effort by Power and other international colleagues of building a global fire history database. This global database allows comparisons across continents, latitudes, longitudes and any area where the history of fire activity has been recorded. To date, nearly 1000 locations have been studied for their fire history. In the case of the French Guiana research, we found a pattern of increasing fire after 1500 AD, which is contrary to the robust patterns we have observed from over 300 charcoal records from the Americas that show decreasing fire at the same time. 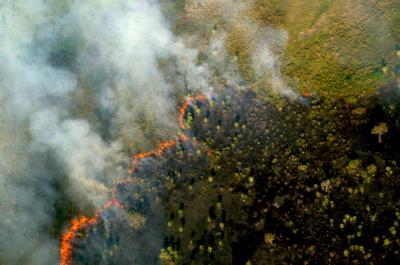 Research indicates that raised-field agriculture can become an alternative to burning down tropical forest for slash and burn agriculture.