Spindle-shaped inclusions in 3 billion-year-old rocks are microfossils of plankton that probably inhabited the oceans around the globe during that time, according to an international team of researchers.

"It is surprising to have large, potentially complex fossils that far back," said Christopher H. House, professor of geosciences, Penn State, and lead author.

However, the researchers not only showed that these inclusions in the rocks were biological in origin, but also that they were likely planktonic autotrophs -- free-floating, tiny ocean organisms that produce energy from their environment.

To determine if these inclusions were actually biological in origin, the researchers looked at 15 different samples of Farrel Quartzite and determined their stable carbon isotope ratios. The percentage of carbon 13 in the microfossils was indicative of material produced by biological processes. They found that the carbon 13 percentage in the background organic matter in the surrounding rock was different from that of the microstructures. 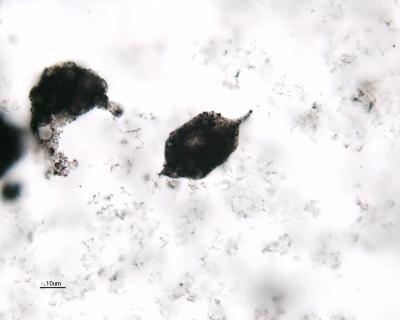 These are spindle-like microstructures from the Farrel Quartzite, Western Australia.

"When considered along with published morphological and chemical studies, these results indicate that the Farrel Quartzite microstructures are bona fide microfossils, and support the interpretation that the spindles were planktonic," the researchers report in the current issue of Geology. The morphological and chemical studies were done by Sugitani and Dorothy Oehler, who is also a co-author and research scientist, Astromaterials Research and Exploration Science Directorate, NASA -- Johnson Space Center.

The spindle-shaped microfossils are from 20 to 60 microns in length, about the size of fine sand and within the size range of today's microplankton.

Stable carbon isotope analysis can determine the biological origin of these microfossils because they used carbon dioxide to create energy and incorporated the carbon into themselves. During this process, the organisms selectively incorporate more carbon 12 than carbon 13 from the available carbon, producing a signature of biological origin.

Oehler notes that the spindles appear to be the same as those found in rocks from the Strelly Pool Formation in Western Australia and the Onverwacht Group in South Africa and Swaziland that are both 3.4 billion years old.

"The existence of these microfossils in diverse locations as far back as 3.4 billion years ago suggests that the oceans probably had life in them for a very extended period of time," said Oehler. "Moreover, this has implications beyond what we have done here, suggesting the evolution of diverse life proceeded quickly."