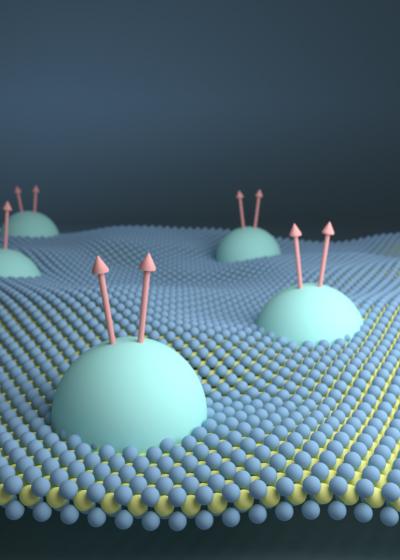 New York, NY--July 6, 2020--Columbia University researchers report that they have observed a quantum fluid known as the fractional quantum Hall states (FQHS), one of the most delicate phases of matter, for the first time in a monolayer 2D semiconductor. Their findings demonstrate the excellent intrinsic quality of 2D semiconductors and establish them as a unique test platform for future applications in quantum computing. The study was published online today in Nature Nanotechnology.

"We were very surprised to observe this state in 2D semiconductors because it has generally been assumed that they are too dirty and disordered to host this effect," says Cory Dean, professor of physics at Columbia University. "Moreover, the FQHS sequence in our experiment reveals unexpected and interesting new behavior that we've never seen before, and in fact suggests that 2D semiconductors are close-to-ideal platforms to study FQHS further."

The fractional quantum Hall state is a collective phenomenon that comes about when researchers confine electrons to move in a thin two-dimensional plane, and subject them to large magnetic fields. First discovered in 1982, the fractional quantum Hall effect has been studied for more than 40 years, yet many fundamental questions still remain. One of the reasons for this is that the state is very fragile and appears in only the cleanest materials.

"Observation of the FQHS is therefore often viewed as a significant milestone for a 2D material--one that only the very cleanest electronic systems have reached," notes Jim Hone, Wang Fong-Jen Professor of Mechanical Engineering at Columbia Engineering.

While graphene is the best known 2D material, a large group of similar materials have been identified over the past 10 years, all of which can be exfoliated down to a single layer thickness. One class of these materials is transition metal dichalcogenides (TMD), such as WSe2, the material used in this new study. Like graphene, they can be peeled to be atomically thin, but, unlike graphene, their properties under magnetic fields are much simpler. The challenge has been that the crystal quality of TMDs was not very good.

"Ever since TMD came on the stage, it was always thought of as a dirty material with many defects," says Hone, whose group has made significant improvement to the quality of TMDs, pushing it to a quality near to graphene--often considered the ultimate standard of purity among 2D materials.

In addition to sample quality, studies of the semiconductor 2D materials have been hindered by the difficulties to make good electrical contact. To address this, the Columbia researchers have also been developing the capability to measure electronic properties by capacitance, rather than the conventional methods of flowing a current and measuring the resistance. A major benefit of this technique is that the measurement is less sensitive both to poor electrical contact and to impurities in the material. The measurements for this new study were performed under very large magnetic fields--which help to stabilize the FQHS--at the National High Magnetic Field Lab.

"The fractional numbers that characterize the FQHS we observed--the ratios of the particle to magnetic flux number--follow a very simple sequence," says Qianhui Shi, the paper's first author and a postdoctoral researcher at the Columbia Nano Initiative. "The simple sequence is consistent with generic theoretical expectations, but all previous systems show more complex and irregular behavior. This tells us that we finally have a nearly ideal platform for the study of FQHS, where experiments can be directly compared to simple models."

Among the fractional numbers, one of them has an even denominator. "Observing the fractional quantum Hall effect was itself surprising, seeing the even-denominator state in these devices was truly astonishing, since previously this state has only been observed in the very best of the best devices," says Dean.

Fractional states with even denominators have received special attention since their first discovery in the late 1980s, since they are thought to represent a new kind of particle, one with quantum properties different from any other known particle in the universe. "The unique properties of these exotic particles," notes Zlatko Papic, associate professor in theoretical physics at the University of Leeds, "could be used to design quantum computers that are protected from many sources of errors."

The two Columbia University laboratories--the Dean Lab and the Hone Group--worked in collaboration with the NIMS Japan, which supplied some of the materials, and Papic, whose group performed computational modelling of the experiments. Both Columbia labs are part of the university's Material Research Science and Engineering Center. This project also used clean room facilities at both the Columbia Nano Initiative and City College. Measurements at large magnetic fields were made at the National High Magnetic Field Laboratory, a user facility funded by the National Science Foundation and headquartered at Florida State University in Tallahassee, Fl.

Now that the researchers have very clean 2D semiconductors as well as an effective probe, they are exploring other interesting states that emerge from these 2D platforms.