1 step at a time, researchers learning how humans walk

CORVALLIS, Ore. – Humans and some of our hominid ancestors such as Homo erectus have been walking for more than a million years, and researchers are close to figuring out how we do it.

It's never been completely clear how human beings accomplish the routine, taken-for-granted miracle we call walking, let alone running. But findings published last month in the Journal of Experimental Biology outline a specific interaction between the ankle, knee, muscles and tendons that improve the understanding of a leg moving forward in a way that maximizes motion while using minimal amounts of energy.

The research could find some of its earliest applications in improved prosthetic limbs, said researchers in the College of Engineering at Oregon State University. Later on, a more complete grasp of these principles could lead to walking or running robots that are far more agile and energy-efficient than anything that exists today.

"Human walking is extraordinarily complex and we still don't understand completely how it works," said Jonathan Hurst, an OSU professor of mechanical engineering and expert in legged locomotion in robots. There's a real efficiency to it – walking is almost like passive falling. The robots existing today don't walk at all like humans, they lack that efficiency of motion and agility.

"When we fully learn what the human leg is doing," Hurst added, "we'll be able to build robots that work much better."

Researchers have long observed some type of high-power "push off" when the leg leaves the ground, but didn't really understand how it worked. Now they believe they do. The study concluded there are two phases to this motion. The first is an "alleviation" phase in which the trailing leg is relieved of the burden of supporting the body mass. 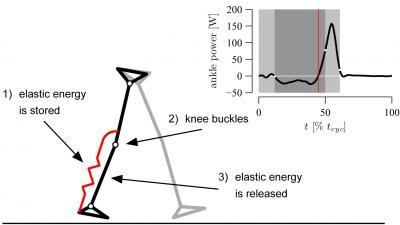 New research is bringing us closer to a real understanding of how human beings walk with such agility and energy efficiency.

Then in a "launching" phase the knee buckles, allowing the rapid release of stored elastic energy in the ankle tendons, like the triggering of a catapult.

"We calculated what muscles could do and found it insufficient, by far, for generating this powerful push off," said Daniel Renjewski, a postdoctoral research associate in the Dynamic Robotics Laboratory at OSU. "So we had to look for a power-amplifying mechanism.

"The coordination of knee and ankle is critical," he said. "And contrary to what some other research has suggested, the catapult energy from the ankle is just being used to swing the leg, not add large amounts of energy to the forward motion."

Walking robots don't do this. Many of them use force to "swing" the leg forward from something resembling a hip point. It can be functional, but it's neither energy-efficient nor agile. And for more widespread use of mobile robots, energy use is crucially important, the researchers said.

"We still have a long way to go before walking robots can move with as little energy as animals use," Hurst said. "But this type of research will bring us closer to that."

The research was supported by the German Research Foundation. The Dynamic Robotics Laboratory at OSU is supported by the Human Frontier Science Program, the National Science Foundation and the Defense Advanced Research Projects Agency, and has helped create some of the leading technology in the world for robots that can walk and run.

One model can run a nine-minute mile and step off a ledge, and others are even more advanced. Robots with the ability to walk and maneuver over uneven terrain could ultimately find applications in prosthetic limbs, an exo-skeleton to assist people with muscular weakness, or use in the military, disaster response or any dangerous situation.