CHAMPAIGN, Ill. — A new study seeks to determine how one parasitic species can give rise to two drastically different outcomes in its host: The human body louse (Pediculus humanus) can transmit dangerous bacterial infections to humans, while the human head louse (also Pediculus humanus) does not.

A report of the new study appears in the journal Insect Molecular Biology.

"Body louse-transmitted diseases include trench fever, relapsing fever and epidemic typhus," said University of Illinois entomology professor Barry Pittendrigh, who led the research. In a previous study, Pittendrigh and his colleagues compared the sequences of all protein-coding genes in head and body lice and determined that the two belonged to the same species – despite the fact that body lice are bigger than head lice, cling to clothing instead of hair, and can transmit disease.

Since the early 2000s, Pittendrigh has worked with John M. Clark, a professor of environmental toxicology and chemistry at the University of Massachusetts, on the molecular biology and genomics of lice. Clark was a collaborator on the 2012 study, and the two have had "a long-term goal of trying to solve this question of why body lice transmit bacterial diseases and head lice don't," Pittendrigh said.

In the new study, Clark's group infected head and body lice with Bartonella quintana, the bacterium that causes trench fever. Pittendrigh's laboratory then looked at gene expression in each to see how the insects responded to the infection.

"Our experiments suggest that the head louse immune system is fairly effective in fighting off the bacteria that cause trench fever," Pittendrigh said. "However, the body lice don't seem to have as good an immune response." 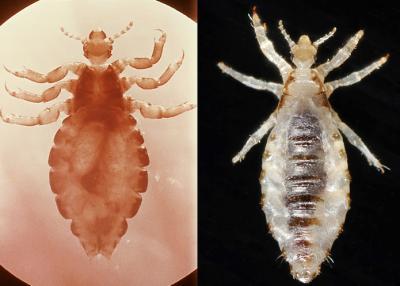 The human head louse, left, and body louse, right, are the same species, but differ in their ability to transmit disease to their host. Researchers now think they know why.

The researchers discovered that several immune genes were regulated differently in head and body lice after infection with the bacteria, and the infection progressed further in body lice over time.

"By eight days post-infection, head lice had killed or contained the invading B. quintana, whereas the bacteria were still proliferating and spreading in body lice," the researchers reported.

The team cannot yet say why head and body louse immune responses differ from one another, but Pittendrigh hypothesizes that the body louse has a reason to be more tolerant of bacterial infection.

"Head and body lice have beneficial bacteria living inside them," he said. "These bacteria make vitamins that the lice need to grow and survive. Body lice tend to grow larger than head lice. It may be that a suppressed immune system allows body lice to grow more of the bacteria that make the vitamins they need, and they grow larger."

The body louse's dampened immune response would allow other invading bacteria, such as those that cause disease in humans, to also survive in its gut, he said.

"So body lice may grow bigger, but they also are more likely to get sick with the trench fever bacteria and pass the disease to humans," Pittendrigh said.