Taste can be classified into five flavors that we sense, but how many odors can we smell? There are likely about 10 basic categories of odor, according to research published September 18th in the open access journal PLOS ONE by Jason Castro from Bates College, Chakra Chennubhotla from the University of Pittsburgh, and Arvind Ramanathan from Oak Ridge National Laboratory. The researchers used advanced statistical techniques to develop an approach for systematically describing smells. Working with a standard set of data, Andrew Dravniek's 1985 Atlas of Odor Character Profiles, the researchers applied a mathematical method to simplify the olfactory information into coherent categories, similar to the way compressing a digital audio or image file reduces the file's size without, ideally, compromising its usefulness.

The team identified 10 basic odor qualities: fragrant, woody/resinous, fruity (non-citrus), chemical, minty/peppermint, sweet, popcorn, lemon and two kinds of sickening odors: pungent and decayed. Senses such as hearing and vision can be discussed in terms that most people understand and that are tied to measurable physical phenomena. But the sense of smell, or olfaction, has thus far not lent itself to such a systematic understanding of what smells we perceive and how those perceptions relate to physical phenomena. "It's an open question how many fundamental types of odor qualities there are," says Castro. "This is in striking contrast to olfaction's 'sister sense,' taste, where we know that five basic qualities seem to organize sensations. 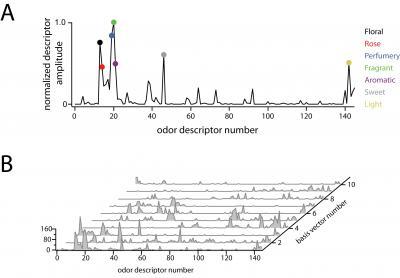 In ongoing work, the researchers are now approaching the problem from the other direction, applying the current research to a bank of chemical structures in an attempt to predict how a given chemical is going to smell. "That's something that nobody's really done with any kind of compelling accuracy," Castro says. "And obviously perfume companies, flavor and fragrance companies, are really interested in doing that well." He adds, "This study supports the idea that the world of smells is tightly structured, and organized by a handful of basic categories.