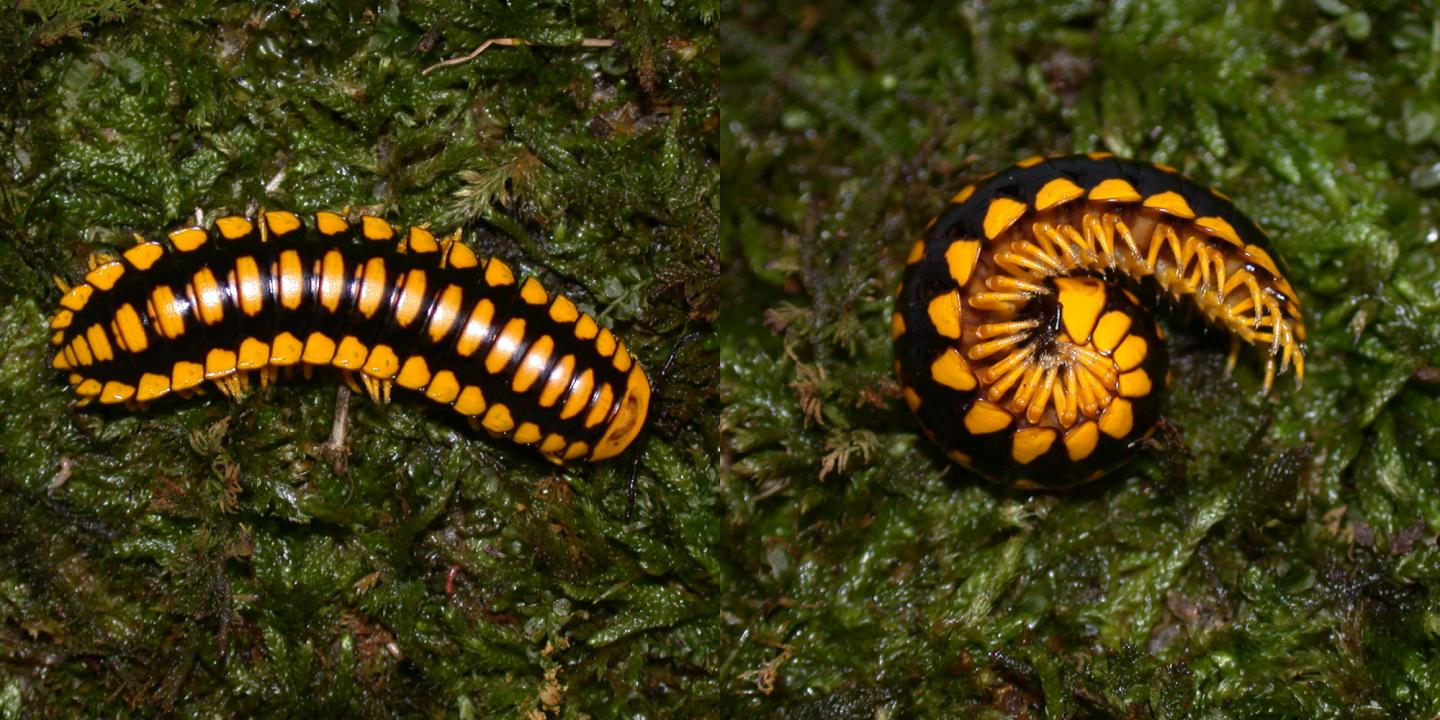 IMAGE: Apheloria polychroma, as the millipede is known, also has an enviable trait in the animal world -- it's covered in cyanide, ensuring any bird that snacks on the colorful but...

The new millipede that Paul Marek discovered is as pretty as it is dangerous.

The thumb-sized millipede that crawls around the forest floor of Southwest Virginia's Cumberland Mountains has more color combinations than any other millipede discovered.

Apheloria polychroma, as the millipede is known, also has an enviable trait in the animal world -- it's covered in cyanide, ensuring any bird that snacks on the colorful but lethal invertebrate won't do it a second time. Lots of other millipedes that don't have as much toxic defense, mimic Apheloria polychroma's coloring in hopes of avoiding becoming another link in the food chain.

This is the tenth species that Marek, an assistant professor in the Virginia Tech College of Agriculture and Life Sciences' Department of Entomology, has discovered and named in recent years. Apheloria polychroma was named for its rainbow of colors and was described by Marek, Jackson Means, a graduate student from Keswick, Virginia and Derek Hennen, a graduate student from Little Hocking, Ohio. Marek runs the only millipede lab in the United States.

The team's findings were recently published in the journal Zootaxa.

While Marek's work is focused on small things, his research helps tell the larger story of the quickly changing natural world. By documenting the many living organisms of the planet, he is helping avoid anonymous extinction--a process in which a species goes extinct before its existence, role in the ecosystem, or potential benefit to humanity is known.

"It is imperative to describe and catalog these species so that we know what role they play in the ecosystem -- and what impact we are having on them," said Marek. "This region is ripe with biodiversity and is an excellent living laboratory to do this work."

The millipedes that copy Apheloria polychroma use what is called Mullerian mimicry, where different species converge on a shared aposematic (warning signal) to defend themselves against a common predator. The more frequently predators encounter what appears to be the same brightly-colored unpalatable millipede and memorize its warning colors, the better the collective advertisement of their noxiousness.

In addition to the millipede's colorful exoskeleton, it also serves an important role in the ecosystem as a decomposer by breaking down decaying leaves, wood, and other vegetation to unlock and recycle their nutrients for future generations of forest life.

In recent years, Marek also has had a tarantula named for him, explored the origins of bioluminescence, and discovered the leggiest creature on Earth.