(Santa Barbara, Calif.) –– To David Cleveland, a professor of environmental studies at UC Santa Barbara, it seemed as though Santa Barbara County would be a great example of what many are advocating as a solution to the problems of a conventional agrifood network –– a local food system.

Trucking or shipping county produce elsewhere increases the number of food miles, or the farm-to-retail distance. The assumption by advocates is that a local food network would reduce those miles and, therefore, greenhouse gas emissions while improving nutrition.

So Cleveland and his students decided to launch a comprehensive study of just how "localized" –– meaning what is produced here is also consumed here –– the agrifood system for fruits and vegetables is in Santa Barbara County, and to try to determine the effects of localization of the food system on greenhouse gas emissions and nutrition. The results of their research, conducted in 2009-10, were recently published in the journal Environmental Science & Technology (http://pubs.acs.org/doi/abs/10.1021/es1040317?journalCode=esthag). The research was supported by funding from Cleveland's award as the first UCSB Sustainability Champion in 2009-10.

The researchers found that more than 99 percent of the produce grown in Santa Barbara County is exported, and more than 95 percent of the produce consumed in the county is imported, some of it from as far away as Chile, Argentina, and New Zealand. The study also found that, surprisingly, if all produce consumed here was grown in the county, it would reduce greenhouse gas emissions less than 1 percent of total agrifood system emissions, and it would not necessarily affect nutrition.

Corie Radka, second author of the study and a recent UCSB environmental studies and zoology graduate, added: "I think that, for people living in Santa Barbara County, it's a privilege that a lot of Middle America doesn't have. We have so much produce here, so much healthy food here, so you just assume there's localization, which results in better nutrition and decreased environmental impact. If that can't happen here, how can it happen anywhere else? 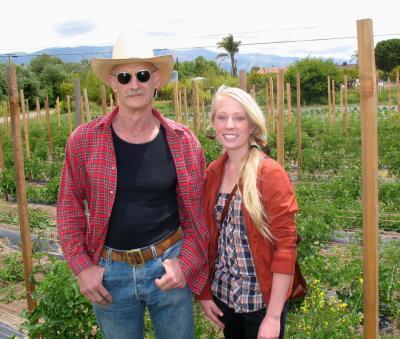 This is David Cleveland and Corie Radka, pictured in a field of tomato plants near UCSB owned by Shawn McMahon.

"Other research has shown that direct transport doesn't contribute that much greenhouse gas compared to other parts of the agrifood life cycle," Radka added. "It's called the local food trap. The word 'local' should mean better nutrition, and a decrease in greenhouse gases, but that's not necessarily so."

"Localization per se is not going to change people's access to food," Cleveland said. "So that's why groups like the Food Bank of Santa Barbara County and the Public Health Department provide food assistance and education outreach to try to get people access to food. Just having the local food there isn't going to change people's ability to buy it, or their ability to cook it, or prepare it. Again, it's the food trap. Just replacing imported fruits and vegetables with ones grown in the county, that's not going to do it."

Make no mistake, Cleveland and Radka said, localization is important. But their idea of a localized food system doesn't agree with what researchers heard when they interviewed local grocery store managers, who spoke with pride about their "local produce."

"I talked to a manager who was very excited about his local fruit, Santa Maria strawberries," Radka said. "But he said he got all of his strawberries from the warehouse. I asked him where the warehouse was, and he said that it's not in the county. Turns out it's in the Bay Area. So strawberries from Santa Maria are transported by truck to a warehouse in the Bay Area and then trucked back here to be sold in stores. To them, that's local. There's a lot of evidence that keeping money from sales of food grown in the county is a boost to the economy but, if that's included in your definition of local, then obviously the definition of local used by some chain grocery stores is not adequate."

Going local, according to Cleveland, is just a start. "We have to not let local become the goal," he said. "I think that's the take-home lesson of this study. Local has to be a strategy for getting to the real, bigger goals we have."

For example, according to Cleveland, one important aspect that is often overlooked is the extent to which local agriculture is dependent on imported labor. "Localization of the Santa Barbara County agrifood system may be at the price of de-localization of communities in Mexico and Central America," he said.

Cleveland, Radka, and other students will be hosting a workshop soon to discuss the potential for localizing the Santa Barbara County agrifood system. "We're talking about localizing as a strategy instead of a goal," Radka said. "Our end goal is to decrease greenhouse gases, increase everyone's access to local produce, improve nutrition, and strengthen the local economy –– and make sure that the localizing strategy meets those goals."