African civilians in war-torn countries have experienced the threat of violence or death, and many have witnessed the abuse, torture, rape and even murder of loved ones. Many Congolese living in Ugandan refugee camps are suffering from severe posttraumatic stress disorder (PTSD).

New research shows that Congolese war refugees who learned the Transcendental Meditation® technique showed a significant reduction in posttraumatic stress disorder in just 10 days, according to a study published today in the February 2014 issue of the Journal of Traumatic Stress (Volume 27, Issue 1, 112–115).

"An earlier study found a similar result after 30 days where 90% of TM subjects dropped to a non-symptomatic level. But we were surprised to see such a significant reduction with this group after just 10 days," said study author Brian Rees, MD, MPH.

The subjects were assessed using the Posttraumatic Stress Disorder Checklist for Civilians, (PCL-C), which rates the severity of PTSD on a scale from 17 to 85. A score below 35 means the symptoms of PTSD have abated. 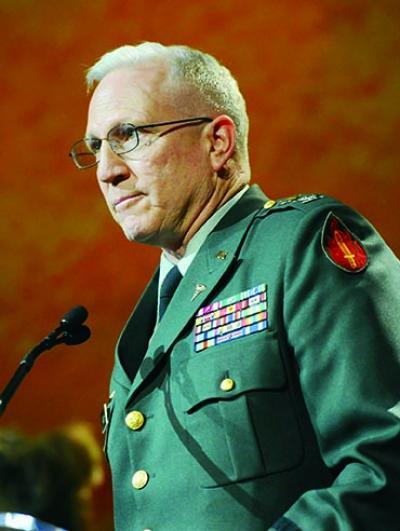 The subjects in the study initially tested with an average score of 77.9. After just 10 days of practicing the Transcendental Meditation technique, their PTSD test scores dropped to an average of 48, which was highly significant clinically.

Thirty days later the subjects were tested again with their PTSD scores falling to an average of 35.3 — meaning that they were nearly without symptoms of PTSD.

"What makes this study interesting is when we tested them in the 90 days before they began the TM technique, their PTSD scores kept going up," said coauthor Fred Travis, director of the Center for Brain, Consciousness, and Cognition at Maharishi University of Management. "During that period their scores were rising, from 68.5 at the beginning to 77.9 after 90 days. But once they started the Transcendental Meditation technique, their PTSD scores plummeted."

According to the researchers, during this particular meditation technique one experiences a deep state of restful alertness. Repeated experience of this state for 20 minutes twice a day cultures the nervous system to maintain settled mental and physical functioning the rest of the day. This helps to minimize disturbing thoughts, sleep difficulties, and other adverse PTSD symptoms.

In this video, Dr. Travis explains the neurophysiology of trauma and how TM relieves it. He says, "Something very profound is happening. Because experience changes the brain, and trauma locks in a specific brain functioning (the over stimulated amygdala), you're stuck in a specific way of thinking and feeling, (vigilance, fear and mistrust) and appreciating the world." He further explains how the experience of transcending, with Transcendental Meditation, calms the amygdala, relieves PTS symptoms and frees the individual "to see more possibilities.”

Esperance Ndozi was one of the Congolese refugees traumatized by the civil war. The 35-year old mother of 5 was part of the group of refugees that learned TM. Before learning the effortless technique, Esperance couldn't find relief from a flood of dark disturbing memories. She could hardly sleep. After a week of meditating 20-minutes twice a day she describes increasing relaxation and relief from PTSD symptoms. "Your mind, your body relaxes. You feel you are out of the outside world. You are just in your peaceful world. No negativity. It doesn't come near me now." Like other refugees in the study the calm and peace grew to last throughout the day. Watch the video.

A previous study of Congolese refugees, which involved 42 subjects found that the Transcendental Meditation group had an average Checklist score of below 35 after 30 days, a non-symptomatic level, while the average score of the control group actually worsened over the same period.

"This is now the fourth study to show an improvement in PTSD," said Dr. Rees, a colonel in the US Army Reserve Medical Corps. "The Transcendental Meditation technique is increasingly being seen as a viable treatment by the US military." 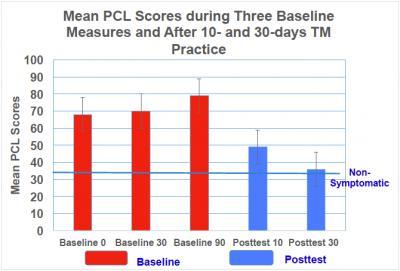 Eleven Congolese refugees who had been tested three times over a 90-day period on the PCL-C, which rates the level of PTSD on a scale from 17 to 85, began with an average score of 77.9. They learned Transcendental Meditation within 8 days of the third test and after 10 days their average score dropped to 48, which was highly clinically significant. They were retested 30 days later measuring an average score of 35.3. With scores below 35 considered non-symptomatic, they were practically symptom free. 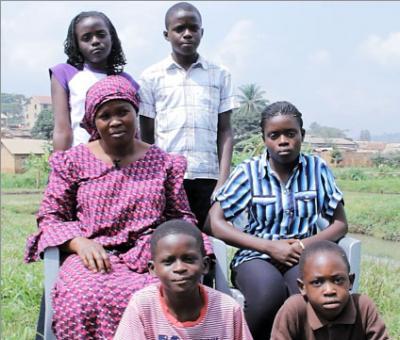 This video was taken of Esperance Ndozi, one of the Congolese refugees in the study. She was interviewed before learning the Transcendental Meditation technique, and one week after regularly practicing TM twice a day. The transformation was noticeable.