Although made of fire-resistant materials, terracotta and cement roof tiles are vulnerable to penetration by windblown embers generated in wildfires, according to new research findings* from the National Institute of Standards and Technology (NIST).

In scoping experiments conducted in the Fire Research Wind Tunnel Facility at Japan's Building Research Institute, NIST fire scientist Samuel Manzello found that the embers—or firebrands—infiltrated gaps between certain types of roofing tiles and, once trapped, proceeded to melt the underlayment below.

Of the four roof styles studied, the flat tile terracotta roofing assembly performed best probably due to its interlocking design. For these tiles, the firebrands were observed to become trapped within the interlocking sections of the tiles and, as a result, the firebrands did not penetrate past the tiles towards the underlayment.

Manzello cautions, however, against a false sense of security with this type of roofing assembly. 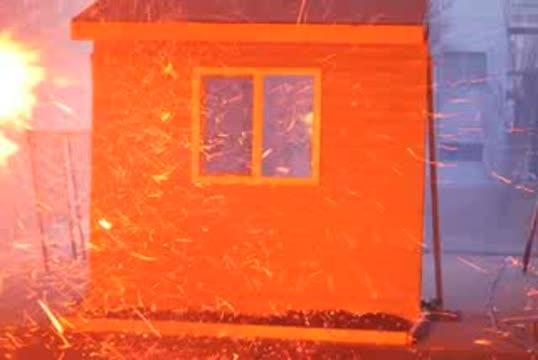 This infiltration of embers through gaps, he explains, ultimately could lead to ignition of materials in an attic space immediately below.

The research findings suggest that one potential approach to reducing wildfire risks would be to install continuous, fire-resistant underlayments. This hypothesis, Manzello says, requires further investigation.

In the new research, Manzello studied roof assemblies made of flat and profiled (wave-like) cement and terracotta tiles. The assemblies were exposed to firebrand showers generated by the NIST-developed firebrand generator. Devised by Manzello, the generator, or NIST Dragon, is a two-meter tall, goose-neck-shaped apparatus that breathes in wood chips and exhales firebrands at a controlled rate.*** The novel device supports NIST's program to improve the fire-resistance or hardening of structures in the wildland-urban interface (WUI), with the ultimate aim of reducing property damage and the threat to life safety associated with WUI fires.