Shifts in global water systems -- markers of a new geological epoch: The Anthropocene

A suite of disquieting global phenomena have given rise to the "Anthropocene," a term coined for a new geologic epoch characterized by humanity's growing dominance of the Earth's environment and a planetary transformation as profound as the last epoch-defining event -- the retreat of the glaciers 11,500 years ago.

And in Bonn, Germany May 21-24, world experts will experts will focus on how to mitigate key factors contributing to extreme damage to the global water system being caused while adapting to the new reality.

"The list of human activities and their impact on the water systems of Planet Earth is long and important," Anik Bhaduri, Executive Officer of the Global Water System Project (GWSP).

"We have altered the Earth's climatology and chemistry, its snow cover, permafrost, sea and glacial ice extent and ocean volume—all fundamental elements of the hydrological cycle. We have accelerated major processes like erosion, applied massive quantities of nitrogen that leaks from soil to ground and surface waters and, sometimes, literally siphoned all water from rivers, emptying them for human uses before they reach the ocean. We have diverted vast amounts of freshwater to harness fossil energy, dammed major waterways, and destroyed aquatic ecosystems."

"The idea of the Anthropocene underscores the point that human activities and their impacts have global significance for the future of all living species -- ours included. Humans are changing the character of the world water system in significant ways with inadequate knowledge of the system and the consequences of changes being imposed. From a research position, human-water interactions must be viewed as a continuum and a coupled system, requiring interdisciplinary inquiry like that which has characterized the GWSP since its inception."

Among many examples of humanity's oversized imprint on the world, cited in a paper by James Syvitski, Chair of the International Geosphere-Biosphere Programme and three fellow experts (in full: http://bit.ly/Yx4COp), and in a new "Water in the Anthropocene" video to debut in Bonn May 21 (available at gwsp.org and http://www.anthropocene.info): 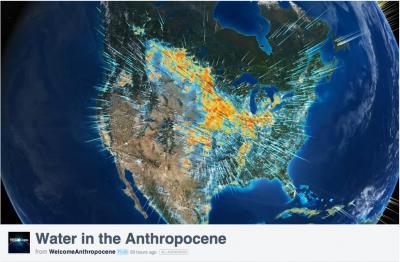 This is an image of North America from the data visualization video "Water in the Anthropocene," to debut May 21 at gwsp.org and www.anthropocene.info.

The water community stresses that concern now extends far beyond 'classic' drinking water and sanitation issues and includes water quality and quantity for ecosystems at all scales.

Says GWSP co-chair Claudia Pahl-Wostl: "The fact is, as world water problems worsen, we lack adequate efforts to monitor the availability, condition and use of water -- a situation presenting extreme long term cost and danger."

"Human water security is often achieved in the short term at the expense of the environment with harmful long-term implications. The problems are largely caused by governance failure and a lack of systemic thinking in both developed and developing countries. Economic development without concomitant institutional development will lead to greater water insecurity in the long-term. Global leadership is required to deal with the water challenges of the 21st century."

"Humanity changes the way water moves around the globe like never before, causing dramatic harm," says Bonn conference keynote speaker Joe Alcamo, Chief Scientist of the UN Environment Programme and former co-chair of the GWSP. "By diverting freshwater for agricultural, industrial and municipal use, for example, our coastal wetlands receive less and less, and often polluted, freshwater. The results include decreased inland and coastal biodiversity, increased coastal salinity and temperature, and contaminated agricultural soils and agricultural runoff."

Adds Charles Vörösmarty, co-Chair and a founding member of the GWSP, which receives input from more hundreds of international scientists: "By throwing concrete, pipes, pumps, and chemicals at our water problems, to the tune of a half-trillion dollars a year, we've produced a technological curtain separating clean water flowing from our pipes and the highly-stressed natural waters that sit in the background. We treat symptoms of environmental abuse rather than underlying causes. Thus, problems continue to mount in the background, yet the public is largely unaware of this reality or its growing costs."

Aims of the Bonn meeting

Featuring 60 special topic sessions, "Water in the Anthropocene" is a capstone event for the GWSP, which is developing "Future Water," the water-related component of the emerging new multi-dimensional international collaborative environmental research framework, Future Earth.

A goal of the meeting is to synthesize major global water research achievements in the last decade and help assembling the scientific foundations to articulate a common vision of Earth's water future.

It will recommended priorities for decision makers in the areas of earth system science and water resources governance and management.

And it will constitute a scientific prelude to October's Budapest Water Summit, a major objective of which is to elevate the importance of water issues within the UN General Assembly negotiations on the Sustainable Development Goals -- a set of globally-agreed future objectives to succeed the UN Millennium Development Goals in 2015. 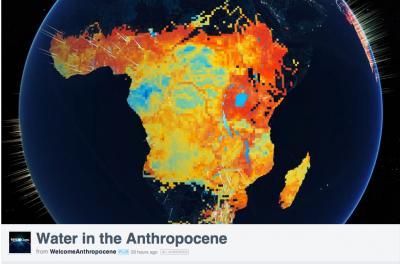 This is an image of Africa from the data visualization video "Water in the Anthropocene," to debut May 21 at gwsp.org and www.anthropocene.info.

Water expert Janos Bogardi, Senior Advisor to GWSP, says the absence of defined global water quantity and quality standards for personal use, agriculture and healthy ecosystems are critical gaps as the world community develops its next set of shared medium-term objectives.

"These definitions constitute a cardinal challenge today for scientists and politicians alike. It is important to reach consensus in order to make progress on the increasingly important notion of 'water security'," says Dr. Bogardi, stressing that changing terminology will not in itself solve problems. "Replacing the word 'sustainability' with 'security' is not a panacea."

With respect to quantity, less than 20 liters daily for sanitary needs and drinking is deemed "water misery" while 40 to 80 liters is considered "comfortable." (Current US per capita average daily consumption is over 300 liters; daily usage in urban Germany is about 120 liters per capita and in urban Hungary, where water is relatively expensive, the figure is 80 liters.)

Missing also are authoritative scientific determinations of how much water can be drawn without crossing a "tipping point" threshold into ecosystem collapse. While there is no general rule, GWSP scientists say withdrawals of 30% to 40% of a renewable freshwater resource constitutes "extreme" water stress, but underline scope to continue satisfying needs if water is returned and recycled in good quality. Mining fossil groundwater resources is by definition non-sustainable.

The GWSP is developing water quality guidelines for people, agriculture and ecosystems in the context of the Sustainable Development Goals.

"The urgency of formulating the post-2015 Sustainable Development Goals and a tracking system for their success means that quite soon the SDG negotiators must offer-up water targets," says Dr. Vörösmarty. "Whether they focus predominantly on continuing the Millennium Development Goals (narrowly on drinking water and sanitation for human health) or formulate a more comprehensive agenda that simultaneously optimizes water security for humans as well as for nature remains an open question. The water sciences community stands ready to take on this challenge. Are the the decision makers?"

In 2007, World Bank expert David Grey and Claudia Sadoff of IUCN, defined water security as "The availability of an acceptable quantity and quality of water for health, livelihoods, ecosystems and production, coupled with an acceptable level of water-related risks to people, environments and economies."

Their use of the term "acceptable" acknowledges that water security has relative, negotiable meanings.

In March, another formulation was set out by UN-Water, the United Nations' inter-agency coordination mechanism for all water-related issues.

It defined water security as: "The capacity of a population to safeguard sustainable access to adequate quantities of and acceptable quality water for sustaining livelihoods, human well-being, and socio-economic development, for ensuring protection against water-borne pollution and water-related disasters, and for preserving ecosystems in a climate of peace and political stability." (see http://bit.ly/1864vMG) 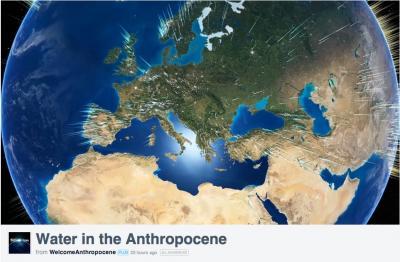 This is an image of Europe from the data visualization video "Water in the Anthropocene," to debut May 21 at gwsp.org and www.anthropocene.info.