A biological filter to remove estrogens from waste water and drinking water. The 15 Bielefeld students submitting this project to the 'international Genetically Engineered Machine competition' (iGEM) at the Massachusetts Institute of Technology (MIT) in Boston, USA are setting their sights high. They are persuading internationally active companies and associations in the biotechnology and chemistry sector to contribute several ten thousands of Euros to cover the costs of entering this rapidly expanding global competition in synthetic biology. Since May, they have been spending their free time in the laboratory making new DNA building blocks, reproducing them, and producing enzymes. First results give reason for optimism.

The birth control pill is a widespread contraception method. However, large amounts of these modified estrogens leave the body again in urine. The conventional methods in sewage treatment plants are unable to treat this waste water sufficiently because the most frequently used estrogen ethinylestradiol is very difficult to break down. As a result, the hormone finds its way into rivers and lakes and also accumulates in drinking water with serious consequences for fish and other aquatic life. These range from reproductive and severe developmental disorders to the formation of female sexual characteristics in males. The long-term consequences of increasing estrogen pollution for human beings are still largely unknown. Nonetheless, declining sperm counts and thereby increasing infertility in men living in industrial nations may well relate to this hormonal pollution. In addition, testicular and prostate cancers as well as osteoporosis (a reduction in bone density) could be a consequence of overly high concentrations of estrogen in the human body. 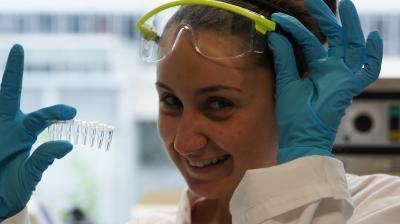 Love of detail and a great deal of patience are needed to spend hours of one's free time standing in the laboratory like Derya Kirasi, a student of Genome-Based Systems Biology at Bielefeld University in Germany.

The goal of the Bielefeld iGEM team is to develop a biological filter in which certain enzymes (so-called laccases) break down the estrogen. Laccases are to be found in many organisms, and one of their properties is an ability to break down aromatic compounds – to which the estrogens belong. One source of particularly efficient laccases for this process is the turkey tail, a type of fungus that likes to grow on trees. The Bielefeld students are aiming to manufacture this enzyme economically and safely with the help of methods from synthetic biology. It should also be possible to extend the concept to other, in part poisonous and carcinogenic pollutants in drinking and waste water. The students already have one first success to announce: they have managed to isolate the genes of several laccases from various bacteria and have placed them in a standard, allowing further development. By the time of the European Jamboree in October, they want to have confirmed how the enzymes break down various substrates such as estrogens, pesticides, and pharmaceuticals and to be starting to immobilize them to filter materials.

Doing research in their own time

The Bielefeld team is composed of 15 students in the Genome-Based Systems Biology, Molecular Cell Biology, and Molecular Biotechnology degree programmes. Participating in the international competition means sacrificing many hours of their own free time, because the Bielefeld students have to carry out the research on top of their regular studies. Moritz Müller, a Master student of Molecular Biotechnology, explains why participating is nonetheless attractive: 'Taking part in the competition gives you a chance to build up your own laboratory work while you are still studying, to pursue your own ideas, and even carry out your own project. These are the sort of challenges you will be facing in your professional career'. The students are being supported by Professor Dr. Alfred Pühler, Professor Dr. Erwin Flaschel, Dr. Jörn Kalinowski, and Dr. Christian Rückert from Bielefeld University's CeBiTec (Center for Biotechnology). 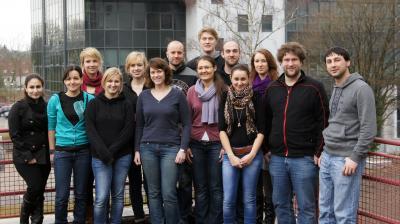 The iGEM competition has been held every year since 2003 by the Massachusetts Institute of Technology (MIT) in Boston. Starting as an MIT study course, the number of competitors has grown rapidly from five teams in 2004 to more than 190 in the present year. All teams face the same task: taking their project from the idea across the laboratory work to gaining funding and communicating the findings. As Dr. Jörn Kalinowski stresses, 'on the student level, the iGEM competition is the world championship in synthetic biology – and it shows what potential this still young field of research has in the near future. Over 2,000 brilliant young minds from the best universities throughout the world are competing with each other. As in the current Bielefeld project, they set themselves ecological and social challenges and often find unconventional solutions. At the same time, the iGEM competition draws the attention of international companies and associations to the students and their promising ideas. The competition has a worldwide impact'. Because of the large numbers of competitors, continental preliminaries called jamborees have been organized since 2011. The European Jamboree will be held from 5-7 October in Amsterdam, Holland. It will decide which European teams get to travel to Boston, USA for the finals in November. Bielefeld University is competing for the third year in a row, and already succeeded in qualifying for Boston in 2010 and 2011. 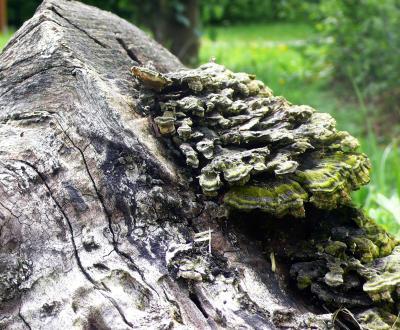 Turkey tails are fungi growing on dead wood such as fallen trees. They contain enzymes that can break down estrogen. However, the Bielefeld students are using a synthetic variant in their research.