When the ladybug has to count her spots

About two percent of all children suffer from Obsessive Compulsive Disorder (OCD), which consists of obsessive thoughts and acts. Obsessive thoughts are intrusive thoughts such as fear or contamination, injury or violent notions that are perceived to be pointless or distressing. Obsessive acts are ritualized acts that have to be repeated frequently, such as washing one's hands, asking questions, counting, touching, checking or collecting. Without treatment, OCD often has serious consequences, such as children no longer being able to go to school on account of their symptoms.

Nowadays, cognitive behavior therapy, possibly supplemented with medication, is considered to be the most reliable method of treating OCD in children. To help psychotherapists with evidence-based OCD treatment, the Center of Child and Adolescent Psychiatry at the University of Zurich has developed the computer game "Ricky and the Spider". The game incorporates the key treatment elements of the cognitive-behavioral approach and makes it easier for children to understand the disorder, its consequences and the treatment. 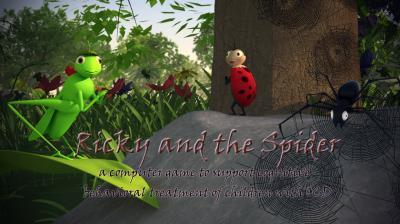 This is a screenshot cover of "Ricky and the Spider."

Ladybug has to count dots

In the game, a spider forces Ricky the Grasshopper and Lisa the Ladybug to do things they do not really want to do. For instance, Ricky is only allowed to hop across the meadow in a particular pattern and Lisa has to count the spots on her wings every evening before she goes to sleep. Fearing the spider, they become entangled deeper and deeper in OCD's web. In the end, Ricky asks Dr. Owl for help.

Veronika Brezinka, who devised the game, hopes that it will help evidence-based treatments to spread beyond the university. "The game is designed to encourage affected children to confront their OCD and help psychotherapists to treat the disorder," explains Brezinka. Much like the computer game "Treasure Hunt", which was developed at the Center of Child and Adolescent Psychiatry three years ago, "Ricky and the Spider" is not a self-help game, but rather a professional tool and should only be used for the purposes of psychotherapeutic treatment. 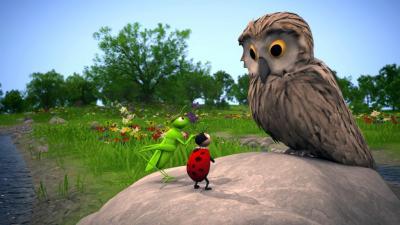