SAN FRANCISCO, August 7, 2012 -- The American paddlefish -- known for its bizarre, protruding snout and eggs harvested for caviar -- duplicated its entire genome about 42 million years ago, according to a new study published in the journal Genome Biology and Evolution. This finding may add a new twist to the way scientists study how fins evolved into limbs since the paddlefish is often used as a proxy for a more representative ancestor shared by humans and fishes.

"We found that paddlefish have had their own genome duplication," said Karen Crow, assistant professor of biology at San Francisco State University. "This creates extra genetic material that adds complexity to comparative studies. It may change the way we interpret studies on limb development."

In order to study how human limbs develop, scientists compare the limb-building genes found in mice with fin-building genes found in fishes. Previous research on paddlefish has suggested that fishes possessed the genetic toolkit required to grow limbs long before the evolution of the four-limbed creatures (tetrapods) that developed into reptiles, birds, amphibians and mammals.

In the last decade, paddlefish have become a useful benchmark in evolutionary studies because their position on the evolutionary tree makes them a reasonably good proxy for the ancestor of the bony fishes that evolved into tetrapods such as humans. However, the fact that paddlefish underwent a genome duplication could complicate what its genes tell us about the fin-to-limb transition, says Crow.

"Our findings suggest that the results of previous studies using paddlefish as a comparative species may need to be re-interpreted," Crow said. 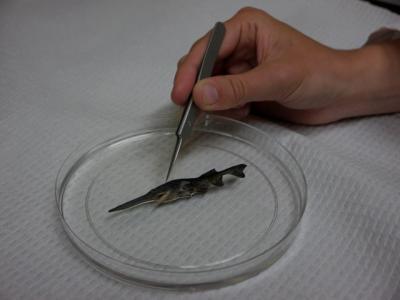 A juvenile paddlefish, just under three inches long at two months old. Fully grown American paddlefish can reach five feet (1.5 m) in length and have a protruding snout or "rostrum." A new study by researchers at San Francisco State University finds that the American paddlefish underwent a genome duplication 42 million years ago.

Whole genome duplications are game-changing events in evolutionary history that give rise to new species or novel features within a species. They occur when a series of unlikely circumstances coincide, resulting in twin copies of every gene. When this happens, one scenario that could take place is that one gene in the pair keeps its designated function while the other is either lost or takes on a new purpose.

"This extra genetic material provides the canvas for evolution to paint with," said Crow, who studies the evolution of novelty and diversity.

"Our findings on the paddlefish suggest that whole duplication is not as uncommon in animals as previously thought," Crow said.