SAN DIEGO — Being mindful appears to help prevent the formation of bad habits, but perhaps good ones too. Georgetown University researchers are trying to unravel the impact of implicit learning, and their findings might appear counterintuitive — at first.

Consider this: when testing who would do best on a task to find patterns among a bunch of dots many might think mindful people would score higher than those who are distracted, but researchers found the opposite — participants low on the mindfulness scale did much better on this test of implicit learning, the kind of learning that occurs without awareness.

This outcome might be surprising until one considers that behavioral and neuroimaging studies suggest that mindfulness can undercut the automatic learning processes — the kind that lead to development of good and bad habits, says the study's lead author, Chelsea Stillman, a psychology PhD student. Stillman works in the Cognitive Aging Laboratory, led by the study's senior investigator, Darlene Howard, PhD, Davis Family Distinguished Professor in the department of psychology and member of the Georgetown Center for Brain Plasticity and Recovery.

That is what they found. Two samples of adult participants first completed a test that gauged their mindfulness character trait, and then they completed one of two sequence learning tasks that measured implicit learning (either the alternating serial reaction time task or the triplet-learning task. Both tasks used circles on a screen and participants were asked to respond to the location of certain colored circles. These tasks tested the ability of participants to learn complex, probabilistic patterns, although test takers would not be aware of that.

The researchers found that people reporting low on the mindfulness scale tended to learn more — their reaction times were quicker in targeting events that occurred more often within a context of preceding events than those that occurred less often.

"The very fact of paying too much attention or being too aware of stimuli coming up in these tests might actually inhibit implicit learning," Stillman says. "That suggests that mindfulness may help prevent formation of automatic habits — which is done through implicit learning — because a mindful person is aware of what they are doing."

Their findings are being presented at Neuroscience 2013, the annual meeting of the Society for Neuroscience. 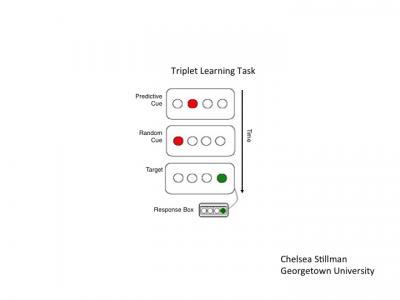 The triplet-learning task tested the ability of participants to learn complex, probabilistic patterns, although test takers would not be aware of that.