A fungus that infects bats as they hibernate is killing them by the millions, placing three species in the East perilously close to being declared endangered — or perhaps beyond, towards extinction.

How to know the actual condition of the populations of different bat species is challenging.

Now a team of researchers from Virginia Tech, the U.S. Geological Survey, the U.S. Army Installation Command, and the U.S. Army Corps of Engineers has determined the most efficient ways to improve and modify a sampling technique that is already available.

Acoustic monitoring — listening to bats in their environment as they commute between feeding areas using echolocation to "see" their surroundings and find insect prey — has become commonplace over the last decade.

"It allows for detection of species richness more quickly and over a greater area than traditional capture methods," said Laci S. Coleman, who conducted research on the team as part of her master of science degree in fisheries and wildlife sciences, which she received from Virginia Tech in 2013.

And listening to bats is noninvasive, avoiding unintentional transfer of the spores of the fungus that causes white-nose syndrome that could occur with handling bats.

White-nose syndrome, which has spread from central New York to at least 25 states and five Canadian provinces since 2006, has caused the deaths of more than 6 million bats.

But there had been no research to determine the best placements of acoustic equipment to detect numerous species until Coleman and colleagues conducted research over the course of two years at Fort Drum, a U.S. Army facility in upstate New York.

With 168 square miles of forests, river, and wetlands, Fort Drum is home to several bat species, most notably the endangered Indiana bat, the northern long-eared bat currently proposed for endangered status, and the little brown bat, all of which have been impacted by white-nose syndrome.

Little brown bats, prior to the disease, were among the most numerous mammal species in all of New England, numbering in the millions.

"The Department of Defense is compelled to follow the Endangered Species Act," said W. Mark Ford, leader of the Virginia Cooperative Fish and Wildlife Research Unit and associate professor in Virginia Tech's College of Natural Resources and Environment, and Coleman's advisor. "Hence they are required to monitor the endangered Indiana bat to assess how military training, range sustainment, and other environmental stewardship efforts, such as forestry and ecological restoration, impact the species." 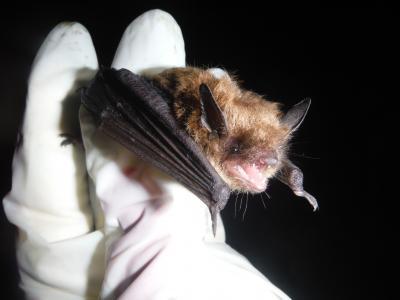 The little brown bat, once among the most numerous mammal species in New England, has been severely impacted by white-nose syndrome.

"The challenge is that, as a result of white-nose syndrome, you cannot monitor bats by catching them because there are too few," Ford continued. "But they are still there, and the act still applies. So we use acoustics to say 'present here, go slow; absent here, go ahead.'"

Coleman is the lead author of a study on the most efficient placement of acoustic bat detectors, which was published Feb. 28 in the Journal of Ecology and the Natural Environment.

The researchers deployed acoustic bat detectors across Fort Drum in various sampling arrays. They specifically targeted sites with open space, such as gaps in forest canopies and over water, where many bat species forage.

The researchers determined that a grid with 15 units produced the highest detection of most species.

On the other hand, transect sampling — setting up a line of detectors for a week, then moving them — sampled a much greater area with greater variation of habitat than permanent stations deployed for the entire season, but required more effort.

The big brown bat, which is only moderately impacted by white-nose syndrome, and bats species not impacted by the fungus were detected widely regardless of the sampling array.

The endangered Indiana bat and little brown bat required both long-term sampling and transect sampling over a wide area in order to determine that they were even present, even though researchers were aware of their historic roosting and foraging areas.

Not having that type of information made detection even more challenging for species such as the tri-colored and northern long-eared bats.

"For species like the northern long-eared bat or tri-colored bat for which Fort Drum managers do not have as much historic maternity colony data, we have to 'think like a bat' and try to monitor in areas of suitable habitat or expected use on what we know about the species' natural history," Coleman explained.

The research concludes that "Deploying detectors across the widest area possible in areas of known previous use, expected use, or suitable habitat is likely more effective than deploying detectors for long periods or at permanent stations."

"We cannot really afford long-term study," said Ford. "Knowing how to determine population numbers relatively rapidly in a science-based way is important in order to move several of these species to endangered status and make land-use decisions accordingly."

"It is more important than ever to be able to detect them so they can be protected," added Coleman.