In a dog-eat-dog world of ruthless competition and 'survival of the fittest,' new research from the University of Leicester reveals that individuals are genetically programmed to work together and cooperate with those who most resemble themselves.

A tendency for similar individuals to cooperate selectively with one another, even if they are not close relatives, can evolve spontaneously in simple organisms. This may help to explain why cooperation is so widespread in nature, the study suggests.

Lead researcher Professor Andrew Colman, of the University's School of Psychology, said: "Cooperation has posed a major problem to evolutionary biologists since Darwin, because although cooperation and altruism abound in nature, Darwin's theory of natural selection is based on the "survival of the fittest". Our study has found a new mechanism of "similarity discrimination" that helps to solve this puzzle."

Professor Colman, Dr Lindsay Browning, and Dr Briony Pulford carried out the study, due to appear in the Journal of Theoretical Biology. The research, funded by the Nuffield Foundation, can explain why organisms tend to discriminate in favour of others who resemble themselves.

Using a combination of computer simulation and mathematical analysis, the researchers showed that similarity discrimination evolves quickly and powerfully in many types of social encounters. It evolves spontaneously in populations of organisms who are merely programmed to behave either cooperatively or selfishly, initially at random, and can recognize others who are genetically similar to themselves. 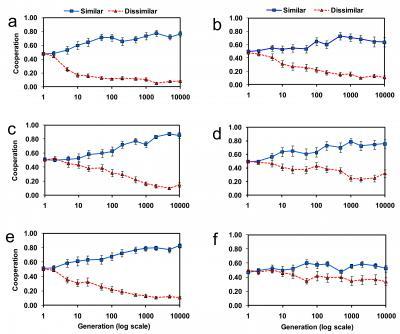 Similarity discrimination is more powerful and efficient than the "greenbeard effect", first suggested by the British biologist Bill Hamilton in 1964 and discovered recently in several species of micro-organisms and insects. The greenbeard effect relies on individuals displaying fixed trait (hence the term "green beard" suggested by Richard Dawkins in 1976) and cooperating selectively with others who also display the trait. The similarity discrimination effect does not depend on any fixed trait: individuals cooperate selectively with others who are genetically similar to themselves, whatever traits they may display.

Research has shown that the greenbeard effect can drive the evolution of cooperation, but only with difficulty and under restrictive conditions, including "viscous" populations of organisms that tend to stay in one place and mate locally with close relatives. The similarity discrimination effect evolves much more quickly and easily, even in freely mixing populations.

Professor Colman said: "We have discovered a new mechanism that helps to explain why cooperation is so common in nature, even between non-relatives. It's tempting to think that it applies to forms of human discrimination such as in-group favouritism, racism, sexism and xenophobia, but it probably doesn't. The similarity discrimination effect relies on tight genetic linkage between genes encoding for behaviour and traits that others use to judge genetic similarity. Most human traits are encoded by multiple genes, and parents' genes are shuffled before being passed on to children, so a genetic linkage could not be maintained for long. I think the effect is much more likely to be observed in simple organisms with simpler genes." 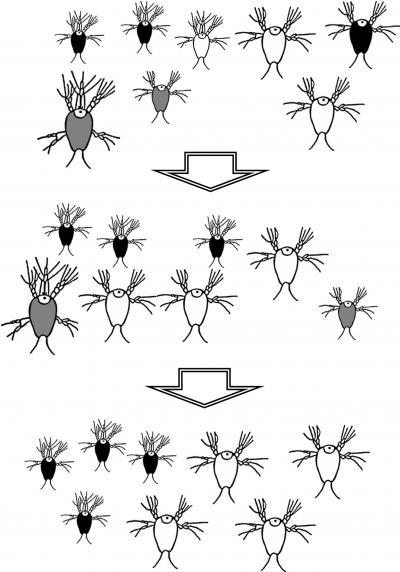 This shows the similarity discrimination effect in a hypothetical population of microorganisms, starting with a diverse population containing two similar pairs at the tops. The similar pairs cooperate with each other and thus leave more offspring in the following generation.