Wednesday 28th June 2013, Durham: A new way of detecting and visualizing fingerprints from crime scenes using colour-changing fluorescent films could lead to higher confidence identifications from latent (hidden) fingerprints on knives, guns, bullet casings and other metal surfaces. The technique is the result of a collaboration between the University of Leicester, the Institut Laue-Langevin and the STFC's ISIS pulsed neutron and muon source, and will be presented today at the Royal Society of Chemistry's Faraday Discussion in Durham.

When your finger touches a surface, it leaves behind deposits of sweat and natural oils in a pattern that mirrors the ridges and troughs found on your fingertips. The odds of two individuals having identical fingerprints are 64 billion to 1, making them an ideal tool for identification in criminal investigations.

The greatest source of fingerprint forensic evidence comes from latent fingerprints, i.e. those not immediately visible to the eye, because they are less likely to be 'wiped'. However, visualizing these prints with sufficient clarity for positive identification often proves difficult. Despite the availability of several enhancement techniques, only 10% of fingerprints taken from crime scenes are of sufficient quality to be used in court.

The classical approach to enhance latent print visibility is to apply a coloured powder that adheres to the sticky residue and provides a visual contrast to the underlying surface. However, these techniques require significant preservation of fingerprint material and are therefore vulnerable to ageing, environmental exposure or attempted washing of the fingerprint residue.

To address this, researchers from the University of Leicester have been working on a new technique that visualizes fingerprints by exploiting their electrically insulating characteristics. Here, the fingerprint material acts like a mask or stencil, blocking an electric current that is used to deposit a coloured electro-active film. This directs the coloured film to the regions of bare surface between the fingerprint deposits, thereby creating a negative image of the print. Unlike conventional fingerprint visualization reagents, the polymers used by the University of Leicester researchers are electrochromic, that is to say they change from one colour to another when subjected to an electrical voltage.

The technique is highly sensitive as even tiny amounts of insulating residue, just a few nanometres thick, can prevent polymer deposition on the metal below. As a result, much less fingerprint residue is required than is typical for other techniques. Also, because it focuses on the gaps between the fingerprint deposits, it can be used in combination with existing (e.g. powder-based) approaches.

In their latest paper in Faraday Discussions the team, led by Professor Robert Hillman, have developed this technique further by incorporating within the film fluorophore molecules that re-emit light of a third colour when exposed to light or any other form of electromagnetic radiation such as ultra-violet rays. Their success in combining the electrochromic and fluorescence approaches provides a significantly wider palette to 'colour' their films and two sets of 'levers' in the form of electricity and light to control and tune this colouration in order to achieve the best possible contrast with the underlying metal surface.

The addition of these large fluorescent tagging molecules required a conducting film that could undergo post-deposition chemical changes. Neutron reflectivity measurements were used to follow and quantify the deposition and functionalisation of the film with the fluorophores. These measurements were performed on FIGARO and D17 at the Institut Laue-Langevin (Grenoble, France) and on INTER at ISIS (STFC Rutherford Appleton Laboratory in the UK).

The exact position and distribution of the fluorophores within the film is key. Professor Hillman and colleagues needed the molecules to penetrate the deposited polymer layer without reaching the underlying metal surface, where their fluorescence is diminished. Using isotopic methods, the team were able to use neutrons at ILL and ISIS to label the different parts of the system and observe the behaviour of each to find the ideal conditions (temperature, polymer concentrations, reaction time) for the introduction of the fluorophores. 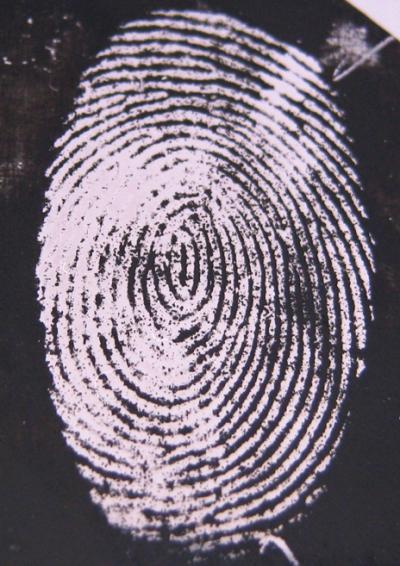 Images of a fingermark left on a stainless steel substrate, following enhancement by electrodeposition of polypyrrole. The light regions are stainless steel that was protected by the sweat residue that was laid on top, preventing the polymer depositing onto it. The dark regions are the polymer in between the fingerprint sweat without the fluorescence 'turned on.'

Using the new technique on laboratory-sourced fingerprints, Professor Hillman and colleagues have already demonstrated an improved ability to make positive identifications due to better sample resolution. However the team are keen to stress these prints were taken under laboratory conditions. The next step is to apply it to fingerprints that have been exposed to more realistic scenarios, such as water, heat from a fire or cleaning agents.

Professor Robert Hillman said: "By using the insulating properties of the fingerprints to define their unique patterns and improving the visual resolution through these colour-controllable films, we can dramatically improve the accuracy of crime scene fingerprint forensics. From the images we have produced so far, we are achieving identification with high confidence using commonly accepted standards. This combination of optical absorption analysis with observation based on fluorescence is also opening up fingerprint analysis to a far wider set of samples, particularly those eroded by ageing or aggressive environments. The use of neutrons alongside spectroscopic techniques has been fundamental to understanding how this technique might work in practice and is evidence for what has been a truly collaborative partnership between these three institutions."

Dr Rob Barker, Instrument Scientist at the Institut Laue-Langevin, said: "Neutrons are an ideal tool for understanding what is going on inside these complex systems. Whilst the mix of polymer and fluorescent molecules might look similar to x-rays and other surface-sensitive techniques, neutrons can easily distinguish between them. This allowed us to non-invasively probe on a nanometre scale deep into the sample from the top surface of the polymer to the metal below and follow the marker molecules as they entered the polymer film."

Dr Max Skoda, Instrument Scientist at ISIS said: "The newest neutron reflection instruments, built at both ISIS and the ILL, provide high intensity beams that enable the real time study of changes in such complex systems for the first time. In order to unravel the intricate behaviour of these chemical reactions it was necessary to employ the specialist skills and facilities provided by all the institutes involved. This is a clear example of where investment in new world class scientific capability continues to provide tools for the UK academic community to perform world leading science.

Assistant Chief Constable Roger Bannister of Leicestershire Police said: “Fingerprints have been around in policing for over 100 years but this technique opens up new avenues for the detection of crime in the modern era. This technique potentially offers opportunities for quick results for the more serious crimes in a way that may still permit other forensic analysis to be performed to maximise the opportunities to recover forensic evidence. This follows Leicester University’s long tradition in the field of forensic discovery.”

Access to both the ILL and ISIS is provided to UK researchers by funding from the Science and Technology Facilities Council, STFC, which also operates the ISIS neutron source. 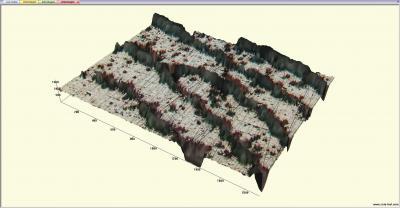 A 3D optical microscope image of the part of the same fingerprint in Fig 1.a. It shows the fingerprint ridges (as light areas) and the deposited polymer (as dark areas). The dark "dots" in the light areas are the gaps left by sweat pores that have been filled by polymer; this is so-called third level detail. The main point to note is a ridge that starts are the bottom right and runs diagonally up and to the left, terminating as a "ridge ending" (an example of second level detail, that might be used as part of an identification) in the center of the image.