The term 'living fossil' has a controversial history. For decades, scientists have argued about its usefulness as it appears to suggest that some organisms have stopped evolving. New research has now investigated the origin of tadpole shrimps, a group commonly regarded as 'living fossils' which includes the familiar Triops. The research reveals that living species of tadpole shrimp are much younger than the fossils they so much resemble, calling into question the term 'living fossil'.

Darwin informally introduced the term 'living fossil' in On the Origin of Species when talking about the platypus and lungfish, groups that appear to have diversified little and appear not to have changed over millions of years. For him living fossils were odd remnants of formerly more diverse groups, and suggestive of a connection between different extant groups. Ever since, the term has been widely used to describe organisms such as the coelacanth, the horseshoe crab and the ginkgo tree. The term has been controversial, as it appears to suggest that evolution has stopped altogether for these organisms, and some scientists have argued that it should be abandoned.

Tadpole shrimps are a small group of ancient crustaceans (a group which includes the familiar Triops) that are often called 'living fossils', because the living species look virtually identical to fossils older than the dinosaurs. Analysing DNA sequences of all known tadpole shrimps, and using fossils from related crustacean groups – such as the water flea and the brine shrimp – the team of researchers, from the University of Hull, University of Leicester and the Natural History Museum in London, showed that tadpole shrimps have in fact undergone several periods of radiation and extinction. The new study is published today in PeerJ, a new peer reviewed open access journal in which all articles are freely available to everyone (https://PeerJ.com). 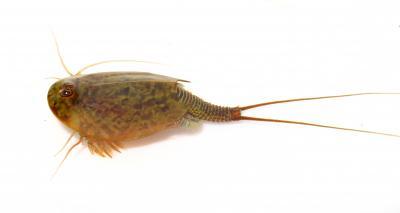 This is an image of a Triops cancriformis, the European Tadpole Shrimp.

Different species of tadpole shrimp often look very similar (they are called 'cryptic species'), and so it is only with the advent of DNA sequencing that scientists have realized that they are a surprisingly diverse group. The team's results uncovered a total of 38 species, many of them still undescribed. This abundance of 'cryptic species' makes it very difficult for fossils to be assigned to any particular species as they all look remarkably similar. For example, 250-million-year-old fossils have been assigned to the living European species Triops cancriformis whereas the team's results indicate that the living T. cancriformis evolved less than 25 million years ago. First author Tom Mathers says "In groups like tadpole shrimps where cryptic speciation is common, the fossil record says very little about patterns of evolution and diversification and so the term 'living fossil' can be quite misleading. For this reason, we used fossils from related groups to gain an understanding about the evolution of tadpole shrimps".

The lead author Africa Gómez said, "Living fossils evolve like any other organism, they just happen to have a good body plan that has survived the test of time. A good analogy could be made with cars. For example the Mini has an old design that is still selling, but newly made Minis have electronic windows, GPS and airbags: in that sense, they are still 'evolving', they are not unchanged but most of the change has been 'under the hood' rather than external. By comparison, organisms labeled as 'living fossils' such as tadpole shrimps, are constantly fine-tuning their adaptation to their environment. Although outwardly they look very similar to tadpole shrimp fossils from the age of the dinosaurs, their DNA and reproductive strategies are relatively hidden features that are constantly evolving. The flexibility of their reproductive strategies, which our research has revealed, could be the evolutionary trick that has allowed them to persist as a morphologically conservative group for so long"