An international group of researchers has helped to determine that dinosaurs have shaped the Easter eggs we buy in the high street.

Scientists investigating whether 70 million-year-old fossil eggs found in the Pyrenees were laid by birds, or their dinosaur ancestors, have published their findings in the current issue of the journal Palaeontology.

And researchers from the University of Leicester have extended the study further by comparing Easter egg shapes to those of birds' and dino eggs.

The authors of the Pyrenees research, Nieves Lopez-Martinez of the Universidad Complutense of Madrid and Enric Vicens of the Universitat Autonoma of Barcelona, compared the shape of the fossil eggs with various dinosaur and modern bird eggs:

"We found that different species have different shaped eggs, and that the eggs of dinosaurs are not the same shape as the eggs of birds," said Enric Vicens.

In the scientific analysis, a mathematical formula was used to determine and describe all possible egg shapes, and real eggs were then plotted into this "egg morphospace"; in simple terms, as Vicens points out "dinosaur eggs tend to be more elongate and less rounded than birds eggs.

"Dinosaur eggs also tend to be more symmetrical with less distinction between the blunt and the more pointed end," Vicens added.

A small additional project carried out at the University of Leicester in the UK reveals that Easter egg shape varies considerably more than would be expected if they all came from the same parent species.

Professor Mark Purnell of the University of Leicester Department of Geology, and a council member of the Palaeontological Association, publishers of the research on the Spanish fossil eggs study, said: "Where do Easter eggs come from? At face value this is a simple question, but any parent trying to provide an answer this Easter might struggle to come up with a satisfactory response. According to many, the eggs are delivered by the Easter Bunny, but that doesn't really address the question; where does the Easter Bunny get them from? A quick search of the Internet reveals a confusing range of rumour and speculation – could the Easter Bunny really be a hare? Are Easter eggs from hare's nests (and are these really plover nests?) Or are the eggs just symbols of pagan gods? 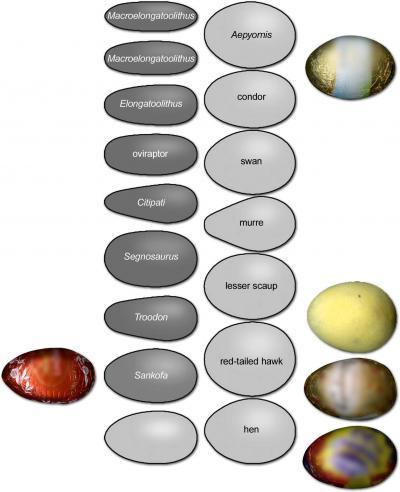 "Perhaps more surprisingly a few eggs are closer in shape to those of dinosaurs, with one in particular being the same shape as the 70 million year old dinosaur egg, Sankofa pyrenaica, described by the Spanish team".

According to Professor Darla Zelenitsky of the University of Calgary, an expert on dinosaurs and their eggs who was not involved in either study "It is really exciting to find these additional links between extinct dinosaurs and living birds - birds are living dinosaurs so it makes perfect sense that their eggs share such similarities." She goes on to note that "Palaeontologists have long suggested that small early mammals might have raided the nests of dinosaurs. Generally, the idea is that they stole the eggs for food, but if the evidence of this Easter egg research is reliable, perhaps early mammals had more playful and colourful motives."

The palaeontological research of Lopez-Martinez and Vicens resulted in a handy diagram showing the range of egg shapes in birds and their dinosaur ancestors. So to answer the question of where your Easter eggs come from, simply compare the shape of your eggs to those in the diagram. (Diagram available from pressoffice@le.ac.uk or via Mark Purnell at map2@le.ac.uk)

The colored image shows the structure of the new dinosaur egg shell, photographed using polarized light. The shell is about a quarter millimeter thick.