Millions of people with type 1 diabetes depend on daily insulin injections to survive. They would die without the shots because their immune system attacks the very insulin-producing cells it was designed to protect. Now, a University of Missouri scientist has discovered that this attack causes more damage than scientists realized. The revelation is leading to a potential cure that combines adult stem cells with a promising new drug.

The discovery is reported in the current online issue of Diabetes, the American Diabetes Association's flagship research publication. Habib Zaghouani, PhD, J. Lavenia Edwards Chair in Pediatrics, leads the research with his team at the MU School of Medicine.

Surrounded by an army of students and a colony of mice, Zaghouani has spent the past 12 years in his lab at MU studying autoimmune diseases like type 1 diabetes. Often called juvenile diabetes, the disease can lead to numerous complications, including cardiovascular disease, kidney damage, nerve damage, osteoporosis and blindness.

Type 1 diabetes attacks the pancreas. The organ, which is about the size of a hand and located in the abdomen, houses cell clusters called islets. Islets contain beta cells that make insulin, which controls blood sugar levels. In people with type 1 diabetes, beta cells no longer make insulin because the body's immune system has attacked and destroyed them. 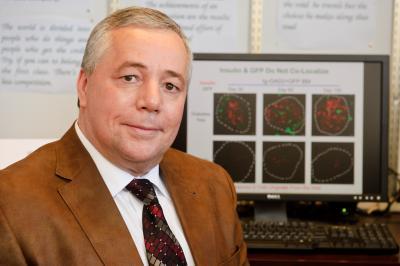 University of Missouri scientist Habib Zaghouani, Ph.D., is developing a potential cure for type 1 diabetes by combining adult stem cells with a promising new drug he developed at MU. His research is published in Diabetes, the American Diabetes Association's flagship research publication.

When the immune system strikes the beta cells, the attack causes collateral damage to capillaries that carry blood to and from the islets. The damage done to the tiny blood vessels led Zaghouani on a new path toward a cure.

In previous studies, Zaghouani and his team developed a drug against type 1 diabetes called Ig-GAD2. They found that treatment with the drug stopped the immune system from attacking beta cells, but too few beta cells survived the attack to reverse the disease. In his latest study, Zaghouani used Ig-GAD2 and then injected adult stem cells from bone marrow into the pancreas in the hope that the stem cells would evolve into beta cells.

Zaghouani is pursuing a patent for his promising treatment and hopes to translate his discovery from use in mice to humans. He is continuing his research with funding from the National Institutes of Health and MU.

"This is extremely exciting for our research team," he said. "Our discovery about the importance of restoring blood vessels has the potential to be applied not only to type 1 diabetes but also a number of other autoimmune diseases."